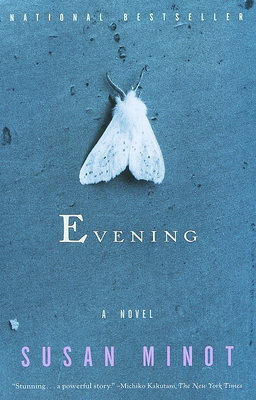 With two novels and one short story collection published to overwhelming critical acclaim ("Monkeys takes your breath away," said Anne Tyler; "heartbreaking, exhilarating," raved the New York Times Book Review), Susan Minot has emerged as one of the most gifted writers in America, praised for her ability to strike at powerful emotional truths in language that is sensual and commanding, mesmerizing in its vitality and intelligence. Now, with Evening, she gives us her most ambitious novel, a work of surpassing beauty. During a summer weekend on the coast of Maine, at the wedding of her best friend, Ann Grant fell in love. She was twenty-five. Forty years later--after three marriages and five children--Ann Lord finds herself in the dim claustrophobia of illness, careening between lucidity and delirium and only vaguely conscious of the friends and family parading by her bedside, when the memory of that weekend returns to her with the clarity and intensity of a fever-dream. Evening unfolds in the rushlight of that memory, as Ann relives those three vivid days on the New England coast, with motorboats buzzing and bands playing in the night, and the devastating tragedy that followed a spectacular wedding. Here, in the surge of hope and possibility that coursed through her at twenty-five--in a singular time of complete surrender--Ann discovers the highest point of her life. Superbly written and miraculously uplifting, Evening is a stirring exploration of time and memory, of love's transcendence and of its failure to transcend--a rich testament to the depths of grief and passion, and a stunning achievement.

Susan Minot was born in Boston, Massachusetts, and grew up in Manchester-by-the-Sea. She studied writing and painting at Brown University and received an MFA in writing from Columbia University. After publishing short stories in Grand Street and The New Yorker she was offered a contract for a novel by the legendary publisher Seymour Lawrence, who was to publish her next three books. His initial support for "a work of fiction" became Monkeys, nine stories which together make up a novel about the Vincent family, a New England family of seven children with a Catholic mother and Brahmin-background father. The stories cover twelve years in the life of the children, their mother's "monkeys," during which a tragic accident alters their lives. It was published in a dozen countries and won the Prix Femina Etranger in France in 1987. The novel was followed by Lust & Other Stories, a collection about wayward artists and journalists living in New York City, particularly about the relations between men and women in their twenties and thirties having difficulty coming together and difficulty breaking apart.
Her third book, Folly, set in the twenties and thirties in Boston, is a novel about a woman from a stifling Brahmin background whose choice of a husband is the determining factor in her life, and about the two different men she falls in love with. The challenge Minot set for herself was to write about a place and society which had always disturbed her and to try to imagine how a woman who was not an idiot could stay in that world.
In 1994 she was contacted by the director Bernardo Bertolucci with the idea of developing his idea for a screenplay about a young American girl visiting English expatriate artists living in Tuscany and having a "sentimental education." She had always been interested in cinema as a student and moviegoer. Stealing Beauty was a collaboration with the director. It was filmed in the summer of 1995, north of Siena, where she was given the opportunity to continue polishing and learning on the set.
Evening is the story of a woman on her deathbed who amidst the delirium and images of her past full life relives a love affair she had forty years earlier, when at twenty-five she attended the wedding of her best friend on an island in Maine. As her children wait and tend to her, she remembers minutely the details of those three days when she met a man, a time which emerges from marriages and divorces and children as being the high point of her life. Evening has been optioned by Kennedy/Marshall at Disney, with Minot currently working on the adaptation for the screen.
Having spent too many years in one place, bent over paper writing, Minot, who has an apartment in New York City, finds herself traveling and away from home much of the time.

"Her best work yet, assured, supple, exhilarating in its nerve and cool momentum" --Joan Didion

"A stunning novel...a powerful story that cuts back and forth in time to give us both the defining moment in a woman's life and an understanding of how that moment has reverberated through the remainder of her days...Her evocation of her heroine's passion for Harris Arden is so convincing, her depiction of the world she inhabits is so fiercely observed...The difference between [Monkeys and Evening] attests to Susan Minot's growing ambition and
assurance as an artist" --Michiko Kakutani, New York Times

"In spare and lovely language, Susan Minot has set forth a real life, in all its particularity and splendor and pain. This is the task of the novelist, and in Evening Minot has succeeded
admirably" --Roxana Robinson, New York Times Book Review

"It astounds in its craftsmanship and imprints itself indelibly on the heart...A haunting work of art that moves at the pace of a suspense thriller" --Sheila Bosworth, New Orleans Times-Picayune

"Evening is a beautifully realized work...more mature and confident than anything she has written...An exquisite novel" --Gail Caldwell, Boston Globe

"A wonderful, truthful, heartbreaking book. . .. Evening vindicates the wildest assertions any of us have made about Susan Minot's talent" --Tom McGuane

"Evening is a supremely sensual, sensitive and dramatic novel...So rich in color and motion, music and atmosphere" --Donna Seaman, Booklist