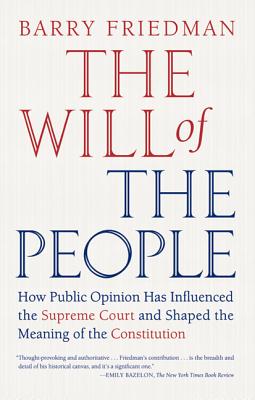 In recent years, the justices of the Supreme Court have ruled definitively on such issues as abortion, school prayer, and military tribunals in the war on terror. They decided one of American history's most contested presidential elections. Yet for all their power, the justices never face election, and hold their offices for life. This combination of influence and apparent unaccountability has led many to complain that there is something illegitimate—even undemocratic—about judicial authority.

In The Will of the People, Barry Friedman challenges that claim by showing that the Court has always been subject to a higher power: the American public. Judicial positions have been abolished, the justices' jurisdiction has been stripped, the Court has been packed, and unpopular decisions have been defied. For at least the past sixty years, the justices have made sure that their decisions do not stray too far from public opinion.

Friedman's pathbreaking account of the relationship between popular opinion and the Supreme Court—from the Declaration of Independence to the end of the Rehnquist Court in 2005—details how the American people came to accept their most controversial institution and, in so doing, shaped the meaning of the Constitution.

Barry Friedman holds the Jacob D. Fuchsberg Chair at the New York University School of Law. He is a constitutional lawyer and has litigated cases involving abortion, the death penalty, and free speech. He lives in New York City.

“Friedman's book admirably manages to distill more than two hundred years of constitutional history into a coherent narrative that attends both to continuity and to change. And a distressingly small number of legal academics can match his lucidity or his ability to turn a phrase.” —Justin Driver, The New Republic

“[A] thought-provoking and authoritative history . . . Friedman's contribution to this discussion is the breadth and detail of his historical canvas, and it's a significant one.” —Emily Bazelon, The New York Times Book Review

“Friedman offers a fresh, dynamic rethinking of the role of the Constitution and the Court that puts democratic politics at the center of the story.” —Publishers Weekly

“We think of the Supreme Court's constitutional decisions as lofty, lonely, unchallengeable. But in truth they are part of a dialogue with public opinion and political leadership--and in the long run the Court does not stray far from the public. That is the convincing conclusion of Barry Friedman's stunning, fascinating history.” —Anthony Lewis, author of Gideon's Trumpet

“Deeply informed by history and political science, The Will of the People offers a fresh and insightful look at the most profound problem in American constitutional thought: how and whether the Supreme Court may thwart the will of a democratic majority. With elegance, clarity, and patience, Friedman tells the story of how the Court has gauged public opinion: now giving in to its power, now shaping it, and even occasionally standing up to it. No one who cares about the development of the Supreme Court--or the Constitution--should miss this book.” —Noah Feldman, Bemis Professor of Law, Harvard Law School, and author of Divided by God and After Jihad

“In this beautifully written and extensively researched study, Barry Friedman explodes the common myth that the Supreme Court regularly thwarts the will of national majorities. The next time you hear a politician or pundit blather on about an out-of-control judiciary, tell them to stop pontificating until they have read this remarkable book.” —Jack M. Balkin, Knight Professor of Constitutional Law and the First Amendment, Yale Law School

“Since its inception, the United States Supreme Court has had to walk the delicate line between a respect for majority will and a protection of minority rights. Barry Friedman gathers wide-ranging evidence, much from surprising sources, to support the proposition that the court rarely strays too far from public opinion in the exercise of the power of judicial review, and we are better for it. All readers will profit mightily from this learned book, whether or not they buy into Friedman's arresting thesis.” —Richard Epstein, James Parker Hall Distinguished Service Professor of Law at the University of Chicago, Peter and Kirsten Bedford Senior Fellow at the Hoover Institution, and Visiting Professor at New York University