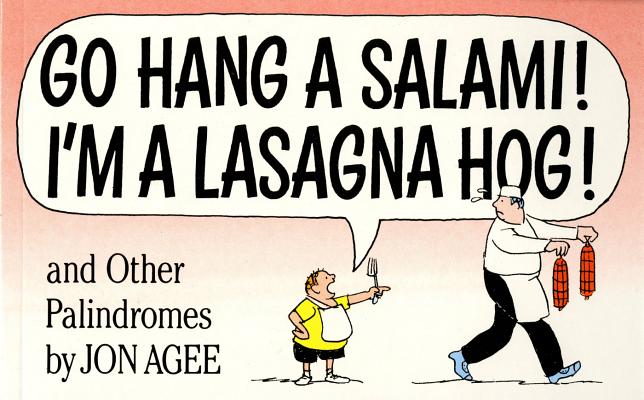 What do Adam, Napoleon, and Agee have in common? Their bond is the palindrome, that peculiar marvel of language when words or sentences read the same forward and backward. But Adam (Madam, I'm Adam) and Napoleon (Able was I ere I saw Elba) are credited with only one palindrome apiece. Jon Agee has come up with a whole bookful
Each of teh more than sixty palindromes is accompanied by hilarious illustration in the inimitable Agee style. Children and adults alike will enjoy these linguistic laughs.

Jon Agee, the author-illustrator-playwright-librettist-palindromist, grew up along the Hudson River in Nyack, New York. As a kid, he created picture books, detective comics, and flip books made out of train ticket stubs. In high school, he spent an inordinate amount of time in the art room. In college, at the Cooper Union in New York City, he studied painting, dabbled in animation, and made an "art" film. Soon after graduating, in 1981, he began getting his first books published.He is probably best known for his fourth book, "The Incredible Painting of Felix Clousseau," in which a mysterious painter's pictures come to life, wreaking havoc in turn-of-the-century Paris. His other books, featuring canine professors, forgotten astronauts, and guffawing grumps, are at times quirky, nonsensical, satiric, and always humorous. Their sophisticated wit appeals to kids and adults alike.Somewhere along the line, Jon became obsessed with creating words and phrases that read the same backwards and forwards. The result was "Go Hang a Salami! I'm a Lasagna Hog!" and its companion volume, "So Many Dynamos!."Jon has also written the book and lyrics to two musicals, "B.O.T.C.H." and "Flies in the Soup," which were performed at the TADA! theater in New York. He would happily continue to pursue this enterprise if he didn't need to eat.In his spare time, Jon does a lot of doodling; or he might write a tongue twister, or an anagram, or a poem. Sometimes he draws a cartoon that gets published in "The New Yorker" magazine, which pleases him very much.

"Agee scales narrative heights with his palindromes...A generously ridiculous and clever book that shows the marvel of words and the sense in nonsense." --Starred, Bulletin of the Center for Children's Books.

"Will appeal to kids as well as to adults. Delightful visual and verbal fun." --Kirkus Reviews