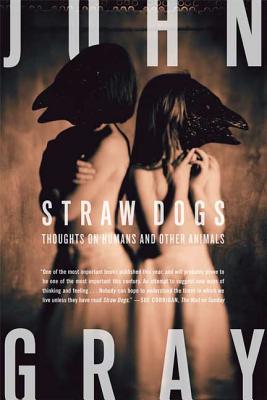 The British bestseller Straw Dogs is an exciting, radical work of philosophy, which sets out to challenge our most cherished assumptions about what it means to be human. From Plato to Christianity, from the Enlightenment to Nietzsche and Marx, the Western tradition has been based on arrogant and erroneous beliefs about human beings and their place in the world. Philosophies such as liberalism and Marxism think of humankind as a species whose destiny is to transcend natural limits and conquer the Earth. John Gray argues that this belief in human difference is a dangerous illusion and explores how the world and human life look once humanism has been finally abandoned. The result is an exhilarating, sometimes disturbing book that leads the reader to question our deepest-held beliefs. Will Self, in the New Statesman, called Straw Dogs his book of the year: "I read it once, I read it twice and took notes . . . I thought it that good." "Nothing will get you thinking as much as this brilliant book" (Sunday Telegraph).

John Gray is the author of many critically acclaimed books, including The Silence of Animals, The Immortalization Commission, Black Mass, and Straw Dogs. A regular contributor to The New York Review of Books, he has been a professor of politics at Oxford, a visiting professor at Harvard and Yale, and a professor of European thought at the London School of Economics. He now writes full-time.

“Nothing will get you thinking as much as this brilliant book.” —George Walden, The Sunday Telegraph

“There is unlikely to be a more provocative or more compelling book published this year than Straw Dogs . . . Gray is one of the most consistently interesting and unpredictable thinkers in Britain.” —Jason Cowley, The Observer (London)

“At once daunting and enthralling, Gray's remarkable new book shows us what it would be like to live without the distraction of consolations.” —Adam Phillips

“This powerful and brilliant book is an essential guide to the new Millennium. Straw Dogs challenges all our assumptions about what it is to be human, and convincingly shows that most of them are delusions.” —J.G. Ballard