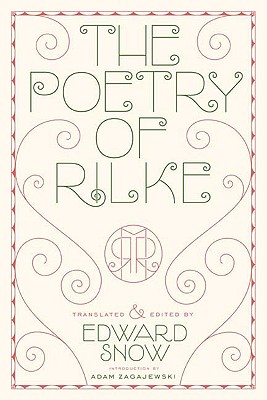 For the past twenty-five years, North Point Press has been working with Edward Snow, “Rilke’s best contemporary translator” (Brian Phillips, The New Republic), to bring into English Rilke’s major poetic works. The Poetry of Rilke—the single most comprehensive volume of Rilke’s German poetry ever to be published in English—is the culmination of this effort. With more than two hundred and fifty selected poems by Rilke, including complete translations of the Sonnets to Orpheus and the Duino Elegies, The Poetry of Rilke spans the arc of Rilke’s work, from the breakthrough poems of The Book of Hours to the visionary masterpieces written only weeks before his death. This landmark bilingual edition also contains all of Snow’s commentaries on Rilke, as well as an important new introduction by the award-winning poet Adam Zagajewski. The Poetry of Rilke will stand as the authoritative single-volume translation of Rilke into English for years to come.

Rainer Maria Rilke was born in Prague in 1875 and traveled throughout Europe for much of his adult life, returning frequently to Paris. His last years were spent in Switzerland, where he completed his two poetic masterworks, the "Duino Elegies "and the "Sonnets to Orpheus." He died of leukemia in December 1926. Edward Snow is a professor of English at Rice University. He is the recipient of an American Academy of Arts and Letters Award for his Rilke translations and has twice received the Academy of American Poets' Harold Morton Landon Translation Award.

“Edward Snow is doing important work. Robert Lowell once wrote that it was hard to imagine Rilke first written in English, that the poems were sealed in German. Snow is unsealing them.”—Robert Phillips, Houston Chronicle

Praise for the Duino Elegies

“[This] translation of the Elegies is the finest that I have ever read . . . Snow has gradually been building a reputation as Rilke’s best contemporary translator in English. His version of the Elegies should cement that reputation, and elevate it: Snow may be the best translator that Rilke has ever had.”—Brian Phillips, The New Republic

Praise for The Book of Images

“Snow has rendered with great skill and accuracy a work both familiar and unknown, more complicated and more immediate than many have suspected, at once grave, mysterious, and beautiful.”—Edward Hirsch

“With these sorrowing and luminous poems . . . it is possible to gain, for the first time in English, a consistent perspective of Rilke’s difficult canon, here restored and disclosed to stunning effect.”—Richard Howard

“Something of the non-vatic Rilke, poet of perception and sensation, is best conveyed in English by Snow’s mediations.”—Harold Bloom

“The Snow translation of these little-known Rilke poems is brilliant.”—Mark Strand