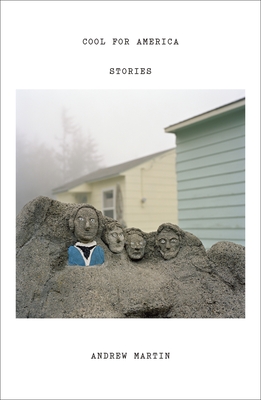 By Andrew Martin
$27.00
Email or call for price

Expanding the world of his classic-in-the-making debut novel Early Work, Andrew Martin’s Cool for America is a hilarious collection of overlapping stories that explores the dark zone between artistic ambition and its achievement

The collection is bookended by the misadventures of Leslie, a young woman (first introduced in Early Work) who moves from New York to Missoula, Montana to try to draw herself out of a lingering depression, and, over the course of the book, gains painful insight into herself through a series of intense friendships and relationships.

Other stories follow young men and women, alone and in couples, pushing hard against, and often crashing into, the limits of their abilities as writers and partners. In one story, two New Jersey siblings with substance-abuse problems relapse together on Christmas Eve; in another, a young couple tries to make sense of an increasingly unhinged veterinarian who seems to be tapping, deliberately or otherwise, into the unspoken troubles between them. In tales about characters as they age from punk shows and benders to book clubs and art museums, the promise of community acts—at least temporarily—as a stay against despair.

Running throughout Cool for America is the characters’ yearning for transcendence through art: the hope that, maybe, the perfect, or even just the good-enough sentence, can finally make things right.

Andrew Martin's first novel Early Work was a New York Times Notable Book of 2018 and a finalist for the Cabell First Novelist Award. His stories and essays have been published in The Paris Review, The Atlantic, The New York Review of Books, Harper's, and T: The New York Times Style Magazine. He lives in New York with his partner, Laura, and their dog Bonnie.

“Martin’s fictional universe of drugs and disappointment, cleverness and self-doubt, shot through with flashes of crackling lucidity, is funny but empathetic toward its deeply flawed characters. Reminiscent of Denis Johnson ’s beautiful and insightful 1992 debut, Jesus’s Son, Cool for America thrives in the same gorgeous space between chaos and contemplation. In short: Bad people can be good, and they’re generally fun to read about.” —Nathan Deuel, Los Angeles Times

“[S]imultaneously sharp and self-lacerating and generous and agreeable . . . Cool for America is animated by much the same spirit as Early Work . . . You feel Martin is going somewhere, and the prospect is tantalizing.” —Matthew Schneier, The New York Times Book Review

"Martin strikes me as less of a kind with Roth or Foster Wallace or Franzen and more decisively a descendant of the great Ann Beattie . . . Like Beattie, Martin compassionately chronicles the sorrows and sex lives of drifting overeducated malcontents . . . In Martin’s vision, there is something borderline spiritual in the millennial’s desire to consider themselves beholden to forces outside their control." —Jennifer Schaffer, The Nation

"Martin has emerged as a leading chronicler of millennial ennui in contemporary America . . . [his] writing is as light and lively as his characters are frozen and hesitant. Frequently hilarious, Martin’s stories are insightful, and the characters are both truthful and authentic." —Kirkus (starred)

"If you’re a fan of Sally Rooney novels, try Andrew Martin’s Early Work. Martin is neither female nor Irish but he scratches the same itch as Rooney, with cerebral characters and tender discoveries and enough acid to keep the thing balanced. Martin’s follow-up is a collection for short stories that explores the search for transcendence through art." —Molly Young, Vulture ("29 Books We Can’t Wait to Read This Summer")

"If you read Martin’s excellent debut novel Early Work, you will recognize the themes (millennial ennui, underemployment, overeducation, a tendency to think too hard and do too little) of his winning first collection—and perhaps some characters (Leslie, Kenny, even Kiki and Scruggs). Mostly published in The Paris Review, these stories are perceptive slices-of-anxiety that will be uncomfortably, ecstatically recognizable to anyone who has ever considered themselves an intellectual—especially if it was sometime in the 2010s." —Emily Temple, LitHub ("Best New Books to Read This Summer")

"Nothing really happens in the stories in Cool for America, and then they just stop. There is no Joycean epiphany, no god descending from the proverbial rafters. There is only life in medias res, and the result is a successful translation of autofiction, which we normally associate with multi-volume quasi-autobiography, into a short story form." —Ryu Spaeth, New Republic


"Martin probes the inertia, self-doubt, and outright shiftlessness that is the prerequisite for artistic creation." —The Millions

"Cool for America serves up glimpses of life in the nation nowadays, and Martin suggests — like the sandcastle — that we are in a world of dazed impermanence. Hardly a portrait of glory from sea to shining sea, these tales drop in on estranged, lost, and overwhelmed people . . . an amusingly sardonic look at this era, which is clearly proving to be an uneasy one, no?" —Drew Hart, Artsfuse

“Remarkable . . . Martin has a real talent for highlighting the absurdity of life while never condescending to his characters. Every story in Cool for America is smart, stylish and a testament to Martin’s keen observations on the human condition.” —Michael Schaub, The Minneapolis Star Tribune

"Andrew Martin’s 2018 debut novel, Early Work, offered a pitch perfect tale of desultory millennials, becoming (or trying to become) writers while sleeping their way to new adventures. The overlapping stories in Martin’s new collection, Cool for America, promise many of the same pleasures that his, uh, earlier work provided: sharp dialogue, meditations on art and artmaking, and colorful depictions of a young, creative milieu." —Alina Cohen, Observer ("5 Most Anticipated Books")

"Andrew Martin's Cool for America is a collection as intensely pleasurable as it is uncomfortably potent. I felt myself growing uneasy as I turned the pages—each cheerfully aimless, morally compromised, defensively witty character cutting closer and closer to the bone. Martin's stories are queasily plausible—or they would be if they weren't also so funny and fun to read." —Miranda Popkey, author of Topics of Conversation

"The characters are real, the meltdowns (yes, a family vacation blowup) and themes are too, and Cool for America serves as an all-too-real glimpse into our everyday." —Ladders

"Overeducated and undermined, the women and men in Andrew Martin's stories fortify themselves with beer, weed, intensely felt verdicts about music and literature, and messing around with people they probably shouldn't be messing around with. Martin's prose is as melancholy and ruthless as Raymond Carver's, and his wit is as dark and sharp as Mary Robison's or Donald Antrim's." —Caleb Crain, author of Overthrow and Necessary Errors