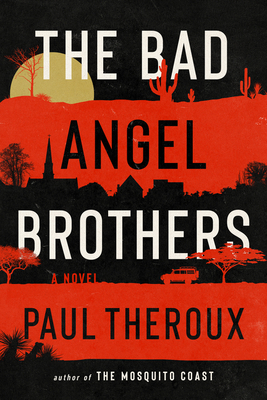 From the legendary American master Paul Theroux comes a brilliant new novel of chilling psychological depth, the tale of a younger brother whose lifelong rivalry with his older brother—a powerful lawyer with a pattern of gleefully vicious betrayals—culminates in the ultimate plan: murder.

Cal has always lived in the shadow of his manipulative and domineering brother, Frank, who was doted upon by their mother and beloved by the girls in their small New England hometown—including Cal’s own girlfriends. In an attempt to escape Frank’s intrusive presence, Cal pursues a different kind of freedom in the world’s wild spaces, prospecting for gold and precious minerals everywhere from the heat of the desert at the Mexican border to the Alaskan chill, to central Africa, and Colombian mines where he will meet the love of his life, Vida. Soon he is dripping in wealth, his pockets full of gold nuggets and emeralds, but the money means far less to him than his independence. To Frank, however, “Cash is king.” As Cal’s success grows, so too does Frank’s power and his influence in Cal’s affairs, the devastating threat he creates at the center of his little brother’s life. And, ultimately, when Frank decides to commit the ultimate betrayal…Cal is left with only one, final solution.

Few writers have as keen an eye for human nature as the inimitable Paul Theroux, and this riveting tale of adventure, betrayal, and the true cost of family bonds is an unmissable new work from one of America’s most distinguished and beloved novelists.

PAUL THEROUX is the author of many highly acclaimed books. His novels include The Lower River, Jungle Lovers, and The Mosquito Coast, and his renowned travel books include Ghost Train to the Eastern Star and Dark Star Safari. He lives in Hawaii and on Cape Cod.

"The fierce rivalry between two siblings comes laden with jealousy, betrayal and an almost mythic lust for vengeance...Theroux is at his masterly best." — The New York Times Book Review

"Theroux draws on his travel writing prowess to follow his protagonist from the Mexican border to the chill of Alaska, from Central Africa to Colombia, uncovering a devastating threat that culminates in the ultimate plan for murder....a chilling psychological novel."
— Honolulu Magazine

“This novel is one for the ages.”  — Bookreporter.com