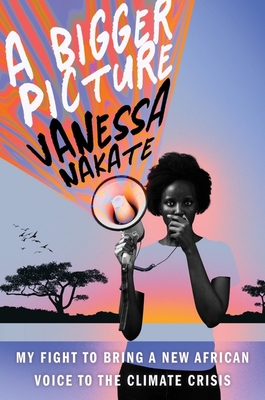 A manifesto and memoir about climate justice and how we can—and must—build a livable future for all, inclusive to all, by a rising star of the global climate movement

Leading climate justice activist Vanessa Nakate brings her fierce, fearless spirit, new perspective, and superstar bona fides to the biggest issue of our time. In A Bigger Picture, her first book, she shares her story as a young Ugandan woman who sees that her community bears disproportionate consequences to the climate crisis. At the same time, she sees that activists from African nations and the global south are not being heard in the same way as activists from white nations are heard. Inspired by Sweden’s Greta Thunberg, in 2019 Nakate became Uganda’s first Fridays for Future protestor, awakening to her personal power and summoning within herself a commanding political voice.

Nakate’s mere presence has revealed rampant inequalities within the climate justice movement. In January 2020, while attending the World Economic Forum in Davos, Switzerland, as one of five international delegates, including Thunberg, Nakate’s image was cropped out of a photo by the Associated Press. The photo featured the four other activists, who were all white. It highlighted the call Nakate has been making all along: for both environmental and social justice on behalf of those who have been omitted from the climate discussion and who are now demanding to be heard.

From a shy little girl in Kampala to a leader on the world stage, A Bigger Picture is part rousing manifesto and part poignant memoir, and it presents a new vision for the climate movement based on resilience, sustainability, and genuine equity.

VANESSA NAKATE is founder of the Rise Up climate movement and the Vash Green Schools Project, which aims to install solar panels on all of Uganda’s 24,000 schools. She has spearheaded the Save Congo Rainforest campaign. The United Nations named her a Young Leader for the Sustainable Development Goals in 2020, and Time magazine named her to its Time100 Next list in 2021. Nakate and her work have been featured in the New York Times, the Guardian,Yes!,Vox, Vogue, the Huffington Post, the International Women’s Forum, and the Global Landscapes Forum, and on globalcitizen.org, greenpeace.org, CNN, the BBC, PBS, and United Nations media. She lives in Kampala, Uganda.

“In this moment of intersecting crises, Vanessa Nakate continues to teach a most critical lesson. She reminds us that while we may all be in the same storm, we are not all in the same boat.”   — Greta Thunberg

“Through Vanessa Nakate’s eyes, A Bigger Picture shows us the threat of climate change to people in East Africa and the relentless courage of one activist fighting to be heard. Vanessa is more than an inspiration—she’s an indispensable voice for our future.”  — Malala Yousafzai

“Vanessa Nakate is a powerful global voice. A strong spirit who will clearly not give up and only grow in strength.”  — Angelina Jolie

“Vanessa Nakate’s message couldn’t be more urgent or her voice more desperately needed. At once intimate and sweeping, A Bigger Picture is a must-read for anyone who cares about the future.”   — Elizabeth Kolbert, author of Under a White Sky and The Sixth Extinction

“This is a wonderful story, wonderfully told! Vanessa Nakate is a crucial climate leader, reminding us of one of the iron laws of global warming: the less you did to cause it, the sooner and harder you get hit. Thank heaven her voice will echo far and wide, and down through the years.”   — Bill McKibben, author of Falter: Has the Human Game Begun to Play Itself Out?