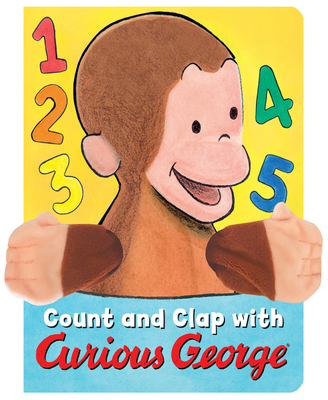 In this engaging interactive story, young readers can move and clap with George as he counts from one to five.

The animated series Curious George is available to watch on Peacock, NBC Universal’s streaming platform. Since the original Curious George book was published in 1941, the little monkey has been capturing the hearts and minds of readers young and old throughout the world. Books about Curious George, including the seven original stories by Margret and Hans Rey, have sold over 75 million copies. So popular that his original story has never been out of print, George has become one of the most beloved and most recognizable characters from children’s literature.

Margret and H. A. Rey created many books during their lives together, including Curious George, one of the most treasured classics of all time, as well as other favorites like Pretzel, Spotty, and Find the Constellations. They had many pets—including two marmoset monkeys that joined them on one of their steamship journeys across the Atlantic. Committed philanthropists in their own lives, a portion of proceeds from each Curious George book sold flows to the Curious George Foundation, which funds programs for children that encourage inquisitiveness in learning and exploring. Curious George has been successfully adapted into a major motion picture and an Emmy-winning television show on PBS and “Pretzel and the Puppies,” based on their picture books, is a streaming series on Apple TV+. www.curiousgeorge.com www.pretzelandthepuppies.com