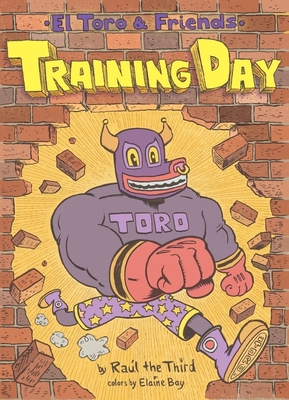 "Bursting with imagination and creativity! Your kids will go loco for El Toro!" —Jeff Kinney, #1 New York Times bestselling author of the Diary of a Wimpy Kid series

Little Lobo introduced readers to his wrestling hero El Toro in ¡Vamos! Let’s Go to the Market! Now El Toro is off on his own adventures in this early reader graphic novel series!

Getting out of bed isn't always easy, especially for Mexican wrestling star El Toro. But his coach, Kooky Dooky, knows that it’s important for the wrestler to stay in shape and keep training—even when he doesn't feel like it.

Can Kooky Dooky raise El Toro’s spirits and get him to practice before his next big wrestling match?

Raúl the Third is the New York Times bestselling, Pura Belpré Award-winning author-illustrator of ¡Vamos! Let’s Go to the Market, ¡Vamos! Let's Go Eat, ¡Vamos! Let’s Cross the Bridge, and the rest of the World of ¡Vamos! series. He is also the illustrator of Schneider Family Award Honoree Stuntboy, in the Meantime, written by Jason Reynolds, and the Lowriders series, written by Cathy Camper. Raúl was born in El Paso, Texas, and grew up going back and forth between El Paso and Ciudad Juárez, México. He now lives in Boston, Massachusetts, with his collaborator and fellow New York Times bestselling artist, Elaine Bay, and their son, Raúl the Fourth.

"Bursting with imagination and creativity! Your kids will go loco for El Toro!" — Jeff Kinney, #1 New York Times bestselling author of the Diary of a Wimpy Kid series

"In typical ¡Vamos! style, a vibrant world bursts to life on every page, filled with movement and a detailed host of cartoon characters, though text and images are simplified to accommodate beginning readers. Raúl offers a lesson in visual literacy, utilizing speech bubbles and panels in addition to traditional narration." — Booklist (starred review)

"A generous touch of giddy surrealism continues to make Raúl the Third’s faunal milieu a destination, lovingly detailed in frenetic compositions and Bay’s SweeTart-hued digital colorization. Exercise and toilet cleaning are rarely this much fun." — Bulletin of the Center for Children’s Books (starred review)

"As in the World of ¡Vamos! books, the creator, alongside colorist Elaine Bay, utilizes comics-style layouts and an eye-catching, lightly faded color palette.... lively banter and humorous illustrations make for an absorbing early reader." — Publishers Weekly

"The unstoppable Raúl the Third brings his border barrio to rip-roaring life with plenty of humor, embedded Spanish, and Chicano cultural references.... Comic-book and lucha libre fans alike will not tap out of this semibilingual smackdown." — Kirkus Reviews