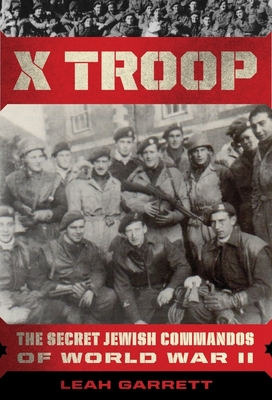 "This is the incredible World War II saga of the German-Jewish commandos who fought in Britain’s most secretive special-forces unit—but whose story has gone untold until now." —Wall Street Journal

June 1942. The shadow of the Third Reich has fallen across the European continent. In desperation, Winston Churchill and his chief of staff form an unusual plan: a new commando unit made up of Jewish refugees who have escaped to Britain. The resulting volunteers are a motley group of intellectuals, artists, and athletes, most from Germany and Austria. Many have been interned as enemy aliens, and have lost their families, their homes—their whole worlds. They will stop at nothing to defeat the Nazis. Trained in counterintelligence and advanced combat, this top secret unit becomes known as X Troop. Some simply call them a suicide squad.

Drawing on extensive original research, including interviews with the last surviving members, Leah Garrett follows this unique band of brothers from Germany to England and back again, with stops at British internment camps, the beaches of Normandy, the battlefields of Italy and Holland, and the hellscape of Terezin concentration camp—the scene of one of the most dramatic, untold rescues of the war. For the first time, X Troop tells the astonishing story of these secret shock troops and their devastating blows against the Nazis.

“Garrett’s detective work is stunning, and her storytelling is masterful. This is an original account of Jewish rescue, resistance, and revenge.”—Wendy Lower, author of The Ravine and National Book Award finalist Hitler’s Furies

LEAH GARRETT is a professor at Hunter College. Her last book, Young Lions: How Jewish Authors Reinvented the American War Novel, won and was short-listed for several major literary awards. She lives in New York City with her husband and their two daughters.

"Based on declassified military records, wartime diaries, and interviews with commandos and their families, X Troop vividly charts the special unit's missions, from storming Pegasus Bridge on D-Day to successfully liberating a trooper's parents' from the Theresienstadt concentration camp to capturing escaped Nazis after the war."   — Smithsonian

"An invaluable study . . . Garrett must be congratulated for pulling all these stories together by bringing praiseworthy attention to these young Jewish resisters of Nazism who became among the most noble and courageous of liberators during World War II... their service is no longer a secret and deserves widespread recognition, thanks to this beautifully constructed book."  — James Kirby Martin, The New York Journal of Books

"The page-turning account is replete with heretofore unknown astounding feats thanks to the author's success in declassifying long-sealed, top-secret British military records . . . Garrett's excellent new book corrects the record by fully recounting the X Troopers' exploits and accurately reflecting who they were." — The Times of Israel

“Garrett has a keen, cinematic eye for the human moment that speaks a much larger truth. And she’s an exceptional writer with a rare gift—no doubt helped by her immersion in classic American accounts of war—for conveying the fear and adrenaline-fueled anarchy of combat. Her account of the D-Day landing, seen through the eyes of her protagonists, is vivid and starkly unsentimental. . . . It is sometimes hard to look, but Garrett draws us in, and X Troop’s 368 pages move very quickly indeed.”  — Jewish Review of Books

"Inspirational . . . Garrett is to be commended for bringing to life this little-known tale of extraordinary wartime heroism by this group of Jewish refugees in the service of Britain."  — History of War

“Drawing from recently declassified British intelligence records and personal archives of former X Troopers, Garrett’s detective work is stunning, and her storytelling is masterful. This is an original account of Jewish rescue, resistance, and revenge from within the Reich and at its edges, starting with the boys’ flight to England and ending with their brave return.”  — Wendy Lower, author of The Ravine and National Book Award finalist Hitler’s Furies

“Garrett folds vivid profiles of . . . prominent military figures into the story, and skillfully draws from war diaries and interviews with surviving X Troopers. This scrupulous history shines a well-deserved spotlight on its heroic subjects.”  — Publishers Weekly

“This tale of profoundly motivated and capable men of action on a noble mission, each profiled in condensed biographies, is a rousing and redefining portrait of an, until now, overlooked group of dedicated warriors who played an outsized role in defeating the Third Reich. Garrett has added a crucial chapter to the always relevant and ever-deepening history of WWII and the Holocaust.”  — Booklist

"Those looking to learn about Jewish heroes will rejoice to discover the outstanding and heroic efforts of these men."  — The Reporter

"A compelling read . . . Garrett's evocation of the tension and drama of the many clandestine operations in Europe undertaken by X-Troopers is gripping."  — Sydney Morning Herald

"Thrilling . . . X Troop stands as a fitting testament to a unique band of brothers"  — Nation Cymru

“This is the best kind of history: highly original, deeply researched, beautifully written, with more than a touch of personal pathos. The men of X Troop went from stateless refugees of Nazi oppression to highly trained British special operations soldiers whose courageous actions did much to hasten Hitler's demise. Kudos to Leah Garrett for telling their amazing story with the authority of a scholar and the immediacy of a novelist.”  — John C. McManus, Ph.D., author of Fire and Fortitude: The U.S. Army in the Pacific War, 1941-1943

“Part history and part mystery, X Troop tells a compelling and little-known story about an improbable group of ‘British’ soldiers who made an important contribution to the war effort.”  — Deborah E. Lipstadt, author of the National Jewish Book Award–winning Antisemitism Here and Now

“Stunning—a book about 87 Jewish commandos, an unlikely band of brothers, who together played a decisive role in defeating the hated Nazis . . . Garrett is fiercely passionate about X Troop and telling their story is for her clearly, intensely personal. . . . Thank you, Leah Garrett, for bringing us this incredible moving story of Jewish heroism.”  — The Jerusalem Report

“A masterful work. Combining the skill of a superb storyteller and the precision of a first-rate scholar, X Troop tells a tale—truly stranger than fiction—of Jewish youth dispatched to the safety of England who volunteered for some of the most perilous of all anti-Nazi missions. An extraordinary portrait of heroism, of human decency amid horror.”  — Steven J. Zipperstein, author of Pogrom: Kishinev and the Tilt of History

“Impeccable research gives the bravest of the brave the limelight they deserve.”  — Ian Dear, author of Ten Commando

“X Troop reads like a page-turning thriller. In Garrett’s brilliant, cinematic telling, based on original interviews and deep-dive archival research, these young European Jewish emigres’ return to the continent as elite Allied super-commandos is both heart-stopping and heart-breaking.”  — James Young, author of The Stages of Memory