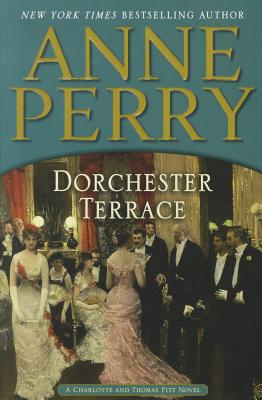 Anne Perry’s acclaimed Charlotte and Thomas Pitt novels have made London’s exclusive world of wealth and power an addictive literary destination for readers everywhere. This new masterpiece, a haunting story of love and treason, invites us not only into the secret places of Britain’s power but also into the innermost sanctums of the fin de siècle Austro-Hungarian Empire.

Thomas Pitt, once a lowly policeman, is now the powerful head of Britain’s Special Branch, and some people fear that he may have been promoted beyond his abilities. He, too, feels painful moments of self-doubt, especially as rumors reach him of a plot to blow up connections on the Dover-London rail line—on which Austrian duke Alois Habsburg is soon to travel to visit his royal English kin.

Why would anyone destroy an entire train to kill one obscure Austrian royal, or are the rumors designed to distract Pitt from an even more devastating plot? He must resolve this riddle at once, before the damage is done.

Meanwhile, in a London sickroom, an old Italian woman—at the end of a romantic career as a revolutionary spy—is terrified that as she sinks into dementia, she may divulge secrets that can kill. And a beautiful young Croatian woman, married to a British power broker, hoards her own mysteries. Apparently all roads lead to the Continent, and Pitt suspects that between them these two fascinating women could tell him things he desperately needs to know. But as the hours tick by, it seems that the only woman Pitt can count on is his clever wife, Charlotte.

No one sustains mesmerizing suspense better than Anne Perry.  In Pitt’s trial by fire, his wrenching moral dilemma, and his electrifying moment of decision, the beloved bestselling author gives us a climax never to be forgotten.

Anne Perry is the bestselling author of two acclaimed series set in Victorian England: the Charlotte and Thomas Pitt novels, including "Treason at Lisson Grove" and "Buckingham Palace Gardens, "and""the William Monk novels, including "Acceptable Loss" and "Execution Dock." She is also the author of a series of five World War I novels, as well as nine holiday novels, most recently "A Christmas Homecoming," and a historical novel, "The Sheen on the Silk," set in the Ottoman Empire. Anne Perry lives in Scotland.

“Perry has always done her historical homework on the darker elements of the British ruling class, and she has outdone herself this time.”—The Washington Times

“An intricate plot about a murder at the palace [with] an irresistibly appealing Upstairs, Downstairs perspective . . . a fine introduction to Perry’s alluring world of Victorian crime and intrigue.”—The New York Times Book Review

“Another winner . . . a wonderful cast of characters with many twisting plots.”—Vero Beach Press Journal

“Anne Perry has once again delivered the tasty concoction her readers have come to expect [and] presents us with moral and political puzzles that are all too close to our own.”—Los Angeles Times Book Review

“An altogether intriguing and enjoyable mystery . . . Fans of this series, with its amazingly well-drawn historical details, know the delight of time traveling back to Victorian England.”—Bookreporter.com

“Terrific, vivid stuff . . . The alarmingly prolific Anne Perry [is] a master of the genre.”—The Seattle Times

“Perry’s as good as it gets. . . . The final courtroom scene produces more victims and left me breathless.”—The Providence Journal