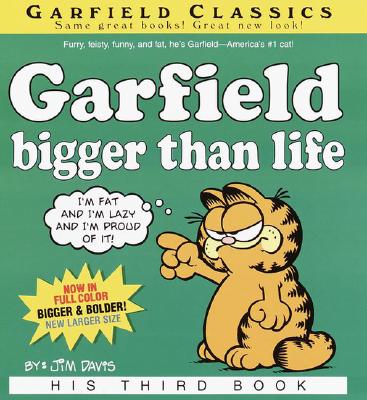 This is book number 3 in the Garfield (Numbered Paperback) series.

The perfect holiday gift for fans of the tubby tabby!

Garfield, the cat with an ego as big as his appetite (and proud of it!), wants you to pump up your self-image and start acting like the superior person you are!

In The Me Book, Garfield covers all aspects of superiority, from basic self-confidence to world domination, including tips on how to:
-- Accept the admiration of others
-- Whip a flabby ego into shape
-- Dress to impress
-- Claw your way up the corporate ladder
-- Condescend to just about everybody

These and other invaluable tips will soon have you saying like Garfield, "I've gotta be me, I'm too good to be anyone else!"

Jim Davis was born on July 28, 1945, in Marion, Indiana. He later attended Ball State University in Muncie, Indiana, where he distinguished himself by earning one of the lowest cumulative grade point averages in the history of the university. The Garfield strip was born on June 19, 1978, syndicated in forty-one U.S. newspapers. Today it’s syndicated in more than 2,100 newspapers worldwide with more than 200 million readers, leading Guinness World Records to name Garfield The Most Widely Syndicated Comic Strip in the World. Davis has had many successes with Garfield,including four Emmy Awards for Outstanding Animated Program and induction into the Licensing Hall of Fame (1998), but his most prized awards are from his peers in the National Cartoonist Society: Best Humor Strip (1981 and 1985), the Elzie Segar Award (1990), and the coveted Reuben Award (1990) for overall excellence in cartooning.