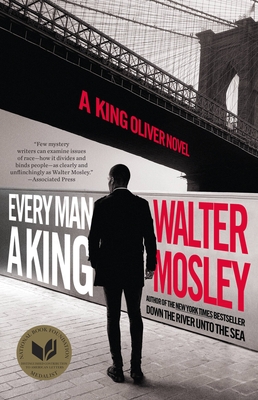 In this highly anticipated sequel from Edgar Award-winning "master of craft and narrative," Walter Mosley, Joe King Oliver is entangled in a dangerous case when he's asked to investigate whether a white nationalist is being unjustly set up. (National Book Foundation)

When friend of the family and multi-billionaire Roger Ferris comes to Joe with an assignment, he’s got no choice but to accept, even if the case is a tough one to stomach. White nationalist Alfred Xavier Quiller has been accused of murder and the sale of sensitive information to the Russians. Ferris has reason to believe Quiller’s been set up and he needs King to see if the charges hold.

This linear assignment becomes a winding quest to uncover the extent of Quiller’s dealings, to understand Ferris’ skin in the game, and to get to the bottom of who is working for whom. Even with the help of bodyguard and mercenary Oliya Ruez—no regular girl Friday—the machine King’s up against proves relentless and unsparing. As King gets closer to exposing the truth, he and his loved ones barrel towards grave danger.

Mosley once again proves himself a "master of craft and narrative" (National Book Foundation) in this carefully plotted mystery that is at once a classic caper, a family saga and an examination of fealty, pride and how deep debt can go.

WALTER MOSLEY is one of America’s most celebrated writers. He was given the National Book Award’s 2020 Medal for Distinguished Contribution to American Letters, named a Grand Master of the Mystery Writers of America and honored with the Anisfield-Wolf Award, a Grammy, a PEN USA Lifetime Achievement Award, the Robert Kirsch Award, numerous Edgars and several NAACP Image Awards. His work is translated into 25 languages.  He has published fiction and nonfiction in The New Yorker, Playboy, and The Nation. As an executive producer, he adapted his novel, The Last Days of Ptolemy Grey, for AppleTV+ and serves as a writer and executive producer for FX’s “Snowfall.”

One of Winter’s Most Eagerly Anticipated Books: The Washington Post, USA Today, AARP

"Mosley again shows his talent for character building, not only in the many-sided Joe, as vulnerable as he is resilient, but also in a superb supporting cast, including Joe's daughter, Aja, and mercenary Oliya, who could easily front her own series... The second King Oliver novel lives up to the excitement generated by its Edgar-winning predecessor."—Booklist

“Mosley’s characteristic writing style is on full display, including his love of unusual similes (“The window gazed upon New Jersey but it was a misty day, making the Garden State look like a half-formed idea”). Joe continues to fascinate as a protagonist, and the secondary characters enrich the storywhether they figure into the main action or not...a worthy successor.”
—Publishers Weekly

"Mosley, a modern master of the noir form, brings readers a worthy follow-upto Down the River Unto the Sea. This time, Joe King Oliver is asked for a favor from a friend he can’t refuse, a case that forces him to look into the unsavory connections between white nationalists, Russians, and high finance. Mosley knows exactly how to craft a mystery that keeps you at the edge of your seat all the while forcing you to reckon with sinister forces at the heart of American society."—Dwyer Murphy, Crimereads