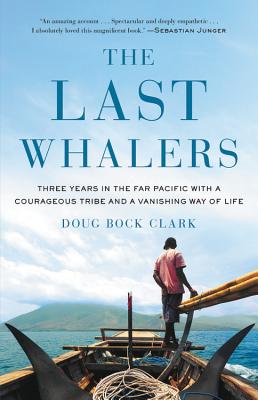 By Doug Bock Clark
for information about purchasing this book, please contact orders@bookpassage.com

A good book can open your eyes to a world you never knew existed; a great book will make you care about those that inhabit that world. The Last Whalers is just such a book, inviting us into the lives of one of the last whaling tribes in existence as they struggle to hold onto the values of their past while the present beckons the imagination of the younger generations. Gripping hunting scenes, tender family moments, conflicts as family members choose between tradition and hope, Doug Bock Clark’s clean prose brings each of these moments to life and gives voice to this singular community.  —Luisa

“A good book can open your eyes to a world you never knew existed; a great book will make you care about those who inhabit that world. The Last Whalers is just such a book, inviting us into the lives of one of the last whaling tribes in existence as they struggle to hold onto the values of their past while the present beckons to the younger generations. With gripping hunting scenes, tender family moments, and conflicts as family members choose between tradition and hope, Doug Bock Clark’s clean prose brings each of these moments to life and gives voice to this singular community.”
— Luisa Smith, Book Passage, Corte Madera, CA

“Regardless of our feelings about whaling in general, most of us understand that there have been instances when indigenous peoples hunted whales in a sustainable fashion for their personal and community survival. Such is the case with the Lamalarens, living on a remote volcanic island in Indonesia. They have lived their careful, quiet lives for centuries—until now. This is an important book for those who care about our indigenous cultures and what they have to offer us, if we only give them the chance.”
— Linda Bond, Auntie's Bookstore, Spokane, WA

In this "immersive, densely reported, and altogether remarkable first book [with] the texture and color of a first-rate novel" (New York Times), journalist Doug Bock Clark tells the epic story of the world's last subsistence whalers and the threats posed to a tribe on the brink.

One of the favorite books of Yuval Noah Harari, author of the classic bestseller Sapiens, "on the subject of humanity's place in the world." (via Airmail)

On a volcanic island in the Savu Sea so remote that other Indonesians call it "The Land Left Behind" live the Lamalerans: a tribe of 1,500 hunter-gatherers who are the world's last subsistence whalers. They have survived for half a millennium by hunting whales with bamboo harpoons and handmade wooden boats powered by sails of woven palm fronds. But now, under assault from the rapacious forces of the modern era and a global economy, their way of life teeters on the brink of collapse.

Award-winning journalist Doug Bock Clark, one of a handful of Westerners who speak the Lamaleran language, lived with the tribe across three years, and he brings their world and their people to vivid life in this gripping story of a vanishing culture. Jon, an orphaned apprentice whaler, toils to earn his harpoon and provide for his ailing grandparents, while Ika, his indomitable younger sister, is eager to forge a life unconstrained by tradition, and to realize a star-crossed love. Frans, an aging shaman, tries to unite the tribe in order to undo a deadly curse. And Ignatius, a legendary harpooner entering retirement, labors to hand down the Ways of the Ancestors to his son, Ben, who would secretly rather become a DJ in the distant tourist mecca of Bali.

Deeply empathetic and richly reported, The Last Whalers is a riveting, powerful chronicle of the collision between one of the planet's dwindling indigenous peoples and the irresistible enticements and upheavals of a rapidly transforming world.

Doug Bock Clark is a writer whose articles have appeared or are forthcoming in the New York Times Magazine, the Atlantic, National Geographic, GQ, Wired, Rolling Stone, The New Republic, and elsewhere.

Clark also won the 2017 Reporting Award, was a finalist for the 2016 Mirror Award, and has been awarded two Fulbright Fellowships, a grant from the Pulitzer Center on Crisis Reporting, and an 11th Hour Food and Farming Fellowship. He has been interviewed about his work on CNN, BBC, NPR, and ABC's 20/20. He is a Visiting Scholar at New York University's Arthur L. Carter Journalism Institute.

"A vital, immersive, and elegant debut...With glittering prose and a novelist's knack for storytelling, Clark carries readers to the heart of this community...Reminiscent of Anne Fadiman's The Spirit Catches You and You Fall Down, Clark's book intimately details, with empathy and grace, the tribe's value system and the physical world on which they depend...We often think of indigenous groups as living in remote locations, on the edges of the modern world, but Clark reverses this proposition, using the stories of these whalers to help us understand just what it looks like when the earth reaches carrying capacity and how humans might in turn respond."—Elizabeth Rush, New York Times Book Review

"An immersive, densely reported, and altogether remarkable first book...The story has the texture and coloring of a first-rate novel...Clark's writing is supple but unshowy...He closely tracks the lives of many Lamalerans, male and female, young and old, and he weaves their stories together with a history of the tribe and its beliefs. He manages to make this tribe's dilemmas universal -- no small feat...Clark brings empathy and literary skill to bear. This is a humbly told book, one in which the author's first-person voice does not intrude. This humility gives the book an organic and resonant propulsion. Accumulated tensions are only slowly released. Scenes are delivered, not summaries. This book earns its emotions...You finish The Last Whalers with hope for the Lamalerans, and hope that Clark writes many more books."—Dwight Garner, New York Times

"An immersive and absorbing chronicle that takes the reader deep into the lives of this tribe and is told with a richness of interior detail that renders their lives, and the choices they face, not just comprehensible but somehow familiar...Clark's writing about the ocean and its creatures is superb, so vivid that the reader can feel the sting of salt water up the nose...The magic in this work is Clark's decision to cede the story over to the Lamalerans themselves. In doing so, he captures the drama of the tribe as it attempts to navigate new opportunities that, while enticing, may bring about the extinction of their culture...Whether that culture will, in the end, withstand mounting pressures from the outside remains to be seen. If it doesn't, The Last Whalers will at least document all that has been lost."—Gabriel Thompson, San Francisco Chronicle

"A fascinating debut...Accessible and empathetic...Clark creates a thoughtful look at the precariousness of cultural values and the lure of modernization in the developing world."—Publishers Weekly

"A gripping story of a community struggling for its very survival, and of the clash between ancient and modern worlds. Clark has a graceful, almost poetic writing style, and his vivid portrait of the Lamalerans and their way of life evokes in the reader a stirring image of a lost world, an ancient society that has somehow stayed virtually untouched by the march of time...until now."—David Pitt, Booklist

"A forceful debut...Clark's prose soars...Furthermore, his sympathy for and devotion to his subjects is real: he speaks both Indonesian and Lamaleran and fosters an intimacy that allows him to disappear entirely in the telling of their story. He brings us into his characters' lives, showing us the rhythms of Lamalera and the day-to-day tensions the villagers face...Clark successfully depicts these people in their full human complexity rather than as primitive tropes...His finely wrought, deeply reported, and highly empathetic account is a human-level testament to dignity in the face of loss and a stoic adherence to cultural inheritance in the face of a rapidly changing world."—Tim Sohn, Outside Magazine

"Doug Bock Clark has delivered us an amazing account of an almost mythological fight--man versus leviathan--and in vivid prose he reveals the most profound truths about both how strong we are and how fragile we are. Part journalism, part anthropology, The Last Whalers is a spectacular and deeply empathetic attempt to understand a vanishing world. I absolutely loved this magnificent book."—Sebastian Junger, #1 New York Times bestselling author of Tribe and The Perfect Storm

"The Last Whalers is a monumental achievement. With luminous writing and expert reporting, Doug Bock Clark provides a rare view into our shared human past, from exhilarating whale hunts to intimate family dramas. In doing so, he reveals the complex lives of men and women whose ancient culture teeters between the eternal teachings of the Ancestors and the pressures and enticements of modernity."—Mitchell Zuckoff, #1 New York Times bestselling author of 13 Hours and Lost in Shangri-La

"The Last Whalers is a true work of art. This lyrically written and richly observed book not only tells of the Lamalerans' spectacular feats of seamanship, but also demonstrates, with heartrending power, what all of us will lose when the march of modernity touches humanity's final tradition-ruled outposts."—Michael Finkel, New York Times bestselling author of The Stranger in the Woods

"The Last Whalers is an intimate and moving account of cultural extinction told on a profoundly human scale, an urgent and affecting plea for understanding and preserving our myriad identities and traditions before they become forever lost on the relentless road toward a monocultural world."—Francisco Cantú, author of the New York Times bestseller and #1 Indie Next pick The Line Becomes a River

"The Last Whalers is an extraordinary feat of reportage and illumination. It introduces a remote community and an endangered way of life, but it refuses to pander to familiar tropes of the exotic, instead bringing its subjects to the page in all their glorious complexity--in all their longing, triumphs, frustrations, and joys. Its gaze is global and intimate at once, tirelessly attuned to the tidal forces and subtle eddies of what it means to be alive."—Leslie Jamison, New York Times bestselling author of The Recovering and The Empathy Exams

"Equal parts rollicking adventure and careful anthropology, The Last Whalers opened up a fresh and fascinating world to me. From the very first lines, I was riveted."—Robert Moor, New York Times bestselling author of On Trails: An Exploration

"This is an important book. The Last Whalers pays a muscular and compassionate witness to our odyssey of being human at the time of the Anthropocene. It is an investigation into our complexities, our desires and boundaries and contradictions--what the book's heroes, the Lamalerans, aptly call 'a typhoon of life.'"—Anna Badkhen, author of Walking with Abel: Journeys with the Nomads of the African Savannah

"Doug Bock Clark's remarkable, gorgeously written account of tribal honor, love, and sacrifice among hunter-gatherers reminds us in this age of breakneck development that the disappearance of indigenous societies diminishes us all."—Bronwen Dickey, New York Times bestselling author of Pit Bull: The Battle over an American Icon

"This is a brilliant, exciting, and terrifying story that reveals the hidden world of Indonesian islanders who find themselves trapped between past and future--between hunting whales with bamboo spears to survive and an outside world poised to wipe them out."—Jack Hitt, author of Off the Road: A Modern-Day Walk Down the Pilgrim's Route into Spain