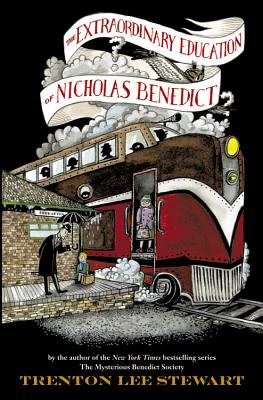 Before there was a Mysterious Benedict Society, there was simply a boy named Nicholas Benedict - now it's time to meet the boy who started it all.

Nine-year-old Nicholas Benedict has more problems than most children his age. Not only is he an orphan with an unfortunate nose, but he also has narcolepsy, a condition that gives him terrible nightmares and makes him fall asleep at the worst possible moments. Now he's being sent to a new orphanage, where he will encounter vicious bullies, selfish adults, strange circumstances -- and a mystery that could change his life forever. Luckily, he has one important thing in his favor: He's a genius.

On his quest to solve the mystery, Nicholas finds enemies around every corner, but also friends in unexpected places -- and discovers along the way that the greatest puzzle of all is himself.

Trenton Lee Stewart is the author of the award-winning and New York Times bestselling Mysterious Benedict Society series. He lives in Arkansas with his wife and two sons.

Diana Sudyka received a master of fine arts degree from Northwestern University. She lives and works in Chicago as an artist.

Praise for The Mysterious Benedict Society:"Great cast of characters, lots of cool puzzles and mysteries. This book reminded me of some of the better children's books I grew up with, like Charlie and the Chocolate Factory and The Phantom Tollbooth." --Rick Riordan

Praise for The Extraordinary Education of Nicholas Benedict * "Gives readers a reason to fall in love with the series all over again...[with] adventures, danger, cleverness, dry wit, and good-hearted characters at the center of the action."—Booklist, starred review

"Stewart balances the elements of his story beautifully, using the mystery puzzle to drive the plot while heightening tension through encounters with the Spiders and deepening the tenderness by following Nicholas's emotional development...[as] Mysterious Benedict Society fans have come to expect (and love) from master storyteller Stewart."—The Horn Book

"Stewart fills in the back story on the narcoleptic genius founder of the Mysterious Benedict Society...[with]admirable insight."—Kirkus Reviews

"Fans will be thrilled with the rich backstory of a beloved character."—School Library Journal