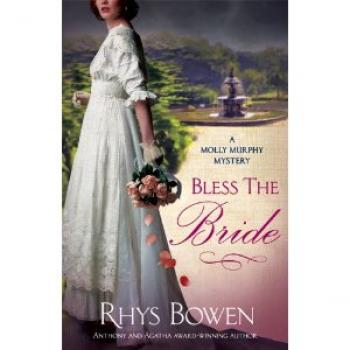 With Molly Murphy’s wedding to NYPD Captain Daniel Sullivan quickly approaching, the Irish sleuth heads to the Westchester County countryside, where his mother can lend her a hand and advise her on a bride’s proper place. And shockingly, Molly seems to be agreeing. She has already promised that she’ll close up her PI business and settle down after marrying, but she isn’t a married woman yet. So, when she gets word of a possible case, she sneaks back into the city to squeeze in a little more sleuthing before the wedding bells can ring.

A wealthy Chinese immigrant wants her to find his missing bride, and Molly---sure she isn’t getting the whole story---suspects that his bride ran off. But where could she go? The only Chinese women in early-twentieth-century New York are kept under lock and key, and Molly can’t help but wonder if she’s saving the woman from the streets or helping to lock her away for good.

Rhys Bowen is the author of the award-winning Molly Murphy and Constable Evans mysteries. Her novels have garnered an impressive array of awards and nominations, including the Anthony award for her novel "For the Love of Mike" and the Agatha Award for "Murphy's Law." Her books have also won the Bruce Alexander Historical Award and the Herodotus Award, and have been shortlisted for the Edgar, the Agatha, the Macavity, the Barry, and the Mary Higgins Clark Award. She has also written "Her Royal Spyness," a series about a minor royal in 1930s England, and she is the author of several short stories, including the Anthony Award-winning "Doppelganger." Her story "Voodoo" was chosen to be part of the anthology of the best of 50 years of "Alfred Hitchcock Mystery Magazine." Ms. Bowen was born in Bath, England, and worked as an announcer and studio manager for the BBC in London, before moving to Australia and then California. It was here she started writing children's and young adult novels, and then moved on to mysteries with the Constable Evans novels. When not writing she loves to travel, sing, hike, play her Celtic harp, and entertain her grandchildren. She lives in San Rafael, California.

Praise for the Novels of Rhys Bowen

“Winning… The gutsy Molly, who’s no prim Edwardian miss, will appeal to fans of contemporary female detectives.”
---Publishers Weekly on The Last Illusion

“This installment outshines the others…. Don’t miss this great period puzzler, reminiscent of Dame Agatha’s mysteries and Gillian Linscott’s Nell Bray series.”
---Booklist on In a Gilded Cage

“Molly is an indomitable creature.… The book bounces along in the hands of Ms. Bowen and her Molly, and there is no doubt that she will be back causing trouble.”
---Washington Times on In Dublin’s Fair City

“Readers will surely testify that Murphy has become one of their favorite characters.… This book is a keeper.”
---Tampa Tribune on In Dublin’s Fair City

“Its enjoyable charm and wit will appeal to a cross section of mystery fans.”
---Baltimore Sun on Oh Danny Boy