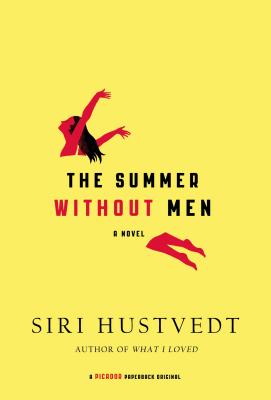 "And who among us would deny Jane Austen her happy endings or insist that Cary Grant and Irene Dunne should get back together at the end of The Awful Truth? There are tragedies and there are comedies, aren't there? And they are often more the same than different, rather like men and women, if you ask me. A comedy depends on stopping the story at exactly the right moment."

Mia Fredrickson, the wry, vituperative, tragic comic, poet narrator of The Summer Without Men, has been forced to reexamine her own life. One day, out of the blue, after thirty years of marriage, Mia's husband, a renowned neuroscientist, asks her for a "pause." This abrupt request sends her reeling and lands her in a psychiatric ward. The June following Mia's release from the hospital, she returns to the prairie town of her childhood, where her mother lives in an old people's home. Alone in a rented house, she rages and fumes and bemoans her sorry fate. Slowly, however, she is drawn into the lives of those around her—her mother and her close friends,"the Five Swans," and her young neighbor with two small children and a loud angry husband—and the adolescent girls in her poetry workshop whose scheming and petty cruelty carry a threat all their own.

From the internationally bestselling author of What I Loved comes Siri Hustvedt's provocative, witty, and revelatory novel about women and girls, love and marriage, and the age-old question of sameness and difference between the sexes.

Siri Hustvedt was born in 1955 in Northfield, Minnesota. She has a Ph.D. from Columbia University in English literature and is the internationally acclaimed author of several novels, The Sorrows of an American, What I Loved, The Enchantment of Lily Dahl, The Blindfold, and The Summer Without Men, as well as a growing body of nonfiction, including Living, Thinking, Looking, A Plea for Eros, and Mysteries of the Rectangle, and an interdisciplinary investigation of the body and mind in The Shaking Woman or A History of My Nerves. She has given lectures on artists and theories of art at the Prado, the Metropolitan Museum of Art in New York, and the Academy of Fine Arts in Munich. In 2011, she delivered the thirty-ninth annual Freud Lecture in Vienna. She lives in Brooklyn.

“Exuberant… A lighter, more lilting meditation on men and women, released in perfect time for summer reading… Hustvedt is a fearless writer… The reward for readers comes in the sheer intelligence of her prose… There is terrific writing here, mulling the gifts and limits of art, sex, marriage, but the touch is emphatically light… She's managed not to shrink the truth of women's lives, without relinquishing love for men.” —San Francisco Chronicle

“Siri Hustvedt's engaging first novel…is a fragmented meditation on identity, abandonment, and loss. Multiple forms of prose pepper the narrative: poems, letters, e-mails, journal entries, and quotes from a raft of well-known scholars, scientists, and writers … Hustvedt manages to move seamlessly between Blake and Rilke to Kierkegaard and Hegel while maintaining a forward motion to this fluid narrative… Satsifying.” —Boston Globe

“Elegant… a smart and surprisingly amusing meditation on love, friendship and sexual politics.” —The Miami Herald

“An investigation into romantic comedy, both the classic Hollywood version—‘love as verbal war’—and Jane Austen’s Persuasion… Among the novel’s pleasures are its analysis of gender…and the character of Mia herself, who comes across as honest, witty and empathetic.” —The New York Times Book Review

“This brisk, ebullient novel is a potpourri of poems, diary entries, emails and quicksilver self-analysis... The noisy chorus in Mia's head has an appealing way of getting inside the reader's too.” —The Wall Street Journal

“A mesmerizing and powerful meditation on marriage, the differences between the sexes, aging and what it means to be a woman…. Truly breathtaking… Rich with both the pleasures and sorrows that make life complete, this is a powerful and provocative novel that will have astute readers reconsidering where exactly the boundaries between truth and fiction lie.” —Bookpage

“Mia Frederickson, the poet narrator of The Summer Without Men… is blessed with empathy, irony and a healthy dose of feminist outrage at the way women's minds and bodies are routinely devalued… [Hustvedt's] finely wrought descriptions of everything from love to mean girls to marital sex make [The Summer Without Men] well worth reading.” —Associated Press

“[Hustvedt's] finely wrought descriptions of everything from love to mean girls to marital sex make [The Summer Without Men] well worth reading.” —Associated Press

“Composed in tight vivid prose, The Summer Without Men is energetic, and handles its subjects with depth and wit, painting its characters and their complex emotions in the kind of detail that rings true to life.” —Bibliokept.org

“Breathtaking… hilarious… What a joy it is to see Hustvedt have such mordant fun in this saucy and scathing novel about men and women, selfishness and generosity…. Hustvedt has created a companionable and mischievous narrator to cherish, a healthy-minded woman of high intellect, blazing humor, and boundless compassion.” —Donna Seaman, Booklist (starred review)

“Intellectually spry… An adroit take on love, men and women, and girls and women.” —Publisher's Weekly

“[A] 21st century riff on the 19th-century Reader-I-married-him school of quiet insurgent women's fiction… Tart comments on male vs. female styles of writing-and reading-novels are a delight… A smart, sassy reflection on the varieties of female experience.” —Kirkus Reviews