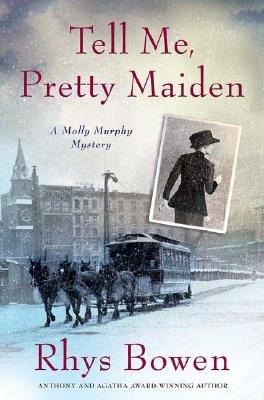 It’s wintertime in New York, and for the first time since Irish immigrant Molly Murphy started her early-twentieth-century detective agency, she is completely snowed in with work. While she’s proving to be quite the entrepreneur and is very much in demand by some of Broadway’s brightest stars and Fifth Avenue’s richest families, she has to grudgingly admit that if she’s going to work more than one case at a time, then she’s going to need some help. Molly’s beau, the recently and wrongly suspended police captain Daniel Sullivan, would make an ideal associate, but before they can agree on the terms of his employment, they stumble upon a young woman lying unconscious in the middle of a snow-covered Central Park. When the woman wakes up she is disorientated and has and lost her ability to speak, the authorities are about to pack her off to an insane asylum when Molly can’t help but step in and take on yet another case.

Rhys Bowen's novels and stories have received a remarkable number of awards, including the Anthony and Agatha awards, the Macavity Award, the Bruce Alexander Historical Award, and the Herodotus Award. She is also the author of the Lady Victoria Georgiana and the Edgar Award--nominated Constable Evan Evans mysteries. Born in England, she now lives in San Rafael, California, with her husband.

“Molly is an indomitable creature…. The book bounces along in the hands of Ms. Bowen and her Molly, and there is no doubt that she will be back causing trouble.”
---Washington Times on In Dublin’s Fair City

“The feisty Molly rarely disappoints in this rousing yarn seasoned with a dash of Irish history.”
---Kirkus Reviews (starred review) on In Dublin’s Fair City

“Readers will surely testify that Murphy has become one of their favorite characters.… This book is a keeper.”
---Tampa Tribune on In Dublin’s Fair City

“A lot of fun and some terrific historical writing. Fans of the British cozy will love it, and so will readers of historical fiction.”
---Toronto Globe and Mail on Oh Danny Boy

“Its enjoyable charm and wit will appeal to a cross section of mystery fans.”
---Baltimore Sun on Oh Danny Boy

“With a riveting plot capped off by a dramatic conclusion, Bowen captures the passion and struggles of the Irish people at the turn of the twentieth century.”
---Publishers Weekly on In Dublin’s Fair City