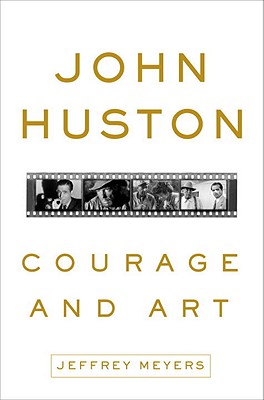 By Jeffrey Meyers
$30.00
Email or call for price

From the acclaimed biographer of Ernest Hemingway, Humphrey Bogart, and
Errol Flynn comes the first complete biography of the legendary John Huston, the extraordinary director, writer, actor, and bon vivant who made iconic films such as The Maltese Falcon, The Treasure of the Sierra Madre, The Asphalt Jungle, and The African Queen and lived one of the most vibrant, eventful lives in Hollywood history.

An actor in the 1920s and scriptwriter in the 1930s, John Huston made his dazzling directorial debut in 1941 with The Maltese Falcon. His career as a filmmaker spanned some fifty-seven years and yielded thirty-seven feature films. He made most of his movies abroad, spent much of his life in Ireland and Mexico, and remains one of the most intelligent and influential filmmakers in history. With equal attention given to Huston's impressive artistic output and tempestuous personal relationships, biographer Jeffrey Meyers presents a vivid narrative of Huston's remarkably rich creative life.
The son of the famous stage and screen actor Walter Huston, John Huston was born in Nevada City, Missouri, and suffered from a weak heart that forced him to live as an invalid for much of his childhood. One day, however, he impulsively left his sickbed, dove over a waterfall, swam into a raging river and began to lead a strenuous life. He became an expert sportsman as well as a boxer, bullfighter, hunter, soldier, gambler and adventurer. Though he didn t finish high school, he was a man of true genius: a serious painter and amusing raconteur, playwright and story writer, stage and screen actor, director of plays on Broadway and operas at La Scala, autobiographer and political activist who crusaded against Senator Joseph McCarthy's anticommunist witch hunts in Hollywood. He was a discerning collector of art and connoisseur of literature, food and wine. Passionate about horses and women, he had five successively younger wives.
Meyers chronicles Huston's extraordinarily peripatetic life and examines his rise as a great masculine artist in the formidable tradition of Melville, Conrad and Hemingway, whose persona, ethos, prose style and virile code had a powerful influence on his life and work. Thirty-four of Huston's thirty-seven films adapted important novels, stories and plays, and Meyers perceptively describes how Huston brilliantly transformed the written word into the cinematic image. Huston's dominant theme is the almost impossible quest, tempered by detachment and irony. His heroes sacrifice honor in pursuit of wealth but fail in that venture, are mocked by cruel fate and remain defiant in the face of defeat. Based on research in Huston's personal and professional archives, and interviews with his children, friends and colleagues, this is the dramatic story of a courageous artist who, Meyers persuasively argues, is one of the most fascinating men who ever lived.

Jeffrey Meyers, a Fellow of the Royal Society of Literature, has recently been given an Award in Literature by the American Academy of Arts and Letters. Thirty of his books have been translated into fourteen languages and seven alphabets, and published on six continents. He lives in Berkeley, California.

"Working with a legend like John Huston (Fat City, Judge Roy Bean) was one of the great highlights of my career.  Jeffrey Meyers has captured the essence of this extraordinary man, whose appetite for life and art was unparalleled.  A must-read for all incurable romantics and lovers of film."
--Stacy Keach, legendary Hollywood actor

"A deft study of one of history's finest film masters and greatest egoists.  Meyers' masterfully orchestrated journey through Huston's life and work--a constant contest between genius and cruelty--is neither hagiography nor indictment. Meyers presents a portrait of the artist that both seduces and appalls."
--Guy Gallo , screenwriter, Under the Volcano