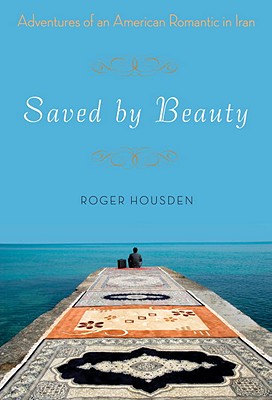 By Roger Housden
$24.00
Email or call for price

Roger Housden traveled to Iran to meet with artists, writers, film makers and religious scholars who embody the long Iranian tradition of humanism, the belief in scholarship and artistry that began with the reign of Cyrus the Great. He traveled to the mountains of Kurdistan to learn from Sufis, whose version of Islam exhorts nothing but tolerance and love. From the bustle of modern Tehran to the paradise gardens of Shiraz to the spectacular mosques and ancient palaces of Isfahan, Housden met Iranians who were warm, welcoming, generous, intellectually curious, and who would recite the poetry of Hafez or Rumi at the slightest opportunity.

Saved By Beauty weaves a richly textured story of many threads. It is a deeply poetic and perceptive appreciation of a culture that has endured for over three thousand years, while it also portrays the creative and spiritual cultures within contemporary Iran that are rarely given any mention in the West. It is a suspense story that reflects on the philosophical and aesthetic questions of good and evil, truth and beauty. And finally, it is the story of a man in his sixties on a personal quest to discover if the Iran of his youthful imagination continued to exist, or whether it had been lost forever under a strict totalitarian regime. In Iran, Roger Housden was brought face to face with the reality that beauty and truth, deceit and violence, are inextricably mingled in the affairs of human life, and was forever changed.

ROGER HOUSDEN is the author of some twenty books, including the best-selling "Ten Poems" series and the novella "Chasing Rumi." English by birth, he has been a writer for the "Guardian "and an interviewer for the BBC. Housden emigrated to the States in 1998 and now lives in the Bay Area. Visit himat www.rogerhousden.com

"Both readers new to Housden and fans of his poetry will treasure this memorable account of what may be a once-in-a-lifetime trip. Even better, his insights are also sure to inform and maybe even re-form preconceived notions many hold about Iran. It is impossible not to lose oneself in Housden's many-faceted narrative."
—Booklist, starred review

"A lyrical panorama of contemporary Persian politics and culture, this book gives contour and nuance to our idea of Iran, and introduces us to complex, very memorable characters."—Publishers Weekly, starred review

“The eloquent account of a Western poet’s encounters with the land, culture and people of Iran...soulful and uplifting.”—Kirkus Reviews