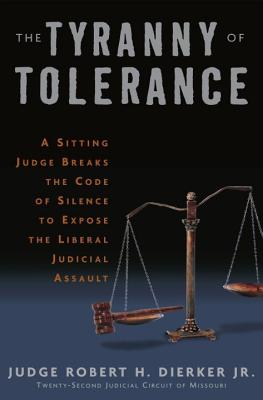 For the first time, a sitting judge blows the whistle on America’s out-of-control courts.

A judge for more than twenty years, Robert Dierker has enjoyed a distinguished legal career. But now that career may be on the line. Why? Because he is breaking the code of silence that has long kept judges from speaking out to present a withering account of how radical liberals run roughshod over the Constitution, waging war on the laws of nature, the laws of reason, and the law of God.

Even those outraged by America’s courts will be shocked by Judge Dierker’s story of activist judges, deep-pocketed special interest groups, pandering politicians, and others who claim to stand for tolerance, equal rights, and social justice, but actually stand for something quite different—something closer to totalitarianism.

Citing not only Judge Dierker’s own experiences but dozens of other recent court cases, The Tyranny of Tolerance shows how the courts enable left-wing activists to ram their dangerous agenda down the throats of the American people. Consider:

• Why do the courts claim the power to tax us?
• Why is a Christian fired when he voices opposition to his employer’s favoring homosexuals?
• Why are airline pilots sued and sent to “diversity training” for recommending that suspicious-looking people of Middle Eastern appearance be kept off planes?
• Why does a judge who defends a monument to the Ten Commandments in a courthouse lose his job?
• Why are speech codes imposed on employers, university students, lawyers (and judges!), while “artistic” indecency is protected from even the mildest regulation?
• Why are peaceful abortion protesters thrown in jail, their right to free speech crushed?
• Why are white and Asian students denied admission to colleges and universities in the name of “diversity”?
• Why is an enemy fighter captured in Afghanistan granted access to U.S. federal courts, overturning judicial precedent safeguarding the president’s wartime powers—to say nothing of common sense?

With this passionate insider’s account, Judge Dierker reminds Americans what’s at stake in the battle for the courts: the Constitution, the success of the war on terrorism, the freedom to worship God, the ability to keep our families safe, the institution of marriage, and much more.

Fortunately, Judge Dierker shows how we can defeat the radical liberals’ tyranny of tolerance. By wresting back control of the courts and restoring the legal, moral, and religious principles embedded in the Constitution, we can ultimately reclaim the republic the Founders bequeathed to us.