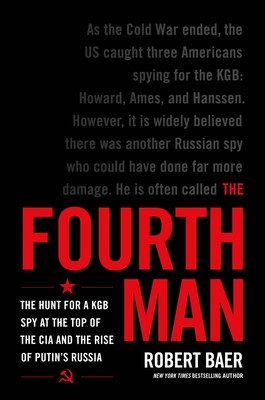 The explosive, never-before-told story of the thrilling hunt for a KGB spy in the top ranks of the CIA, revealing how spies blinded the US to the rise of Putin and Russia’s dangerous future, from New York Times bestselling author and former CIA officer Robert Baer

We think we know all the Cold War’s greatest spy stories. The tales of America’s greatest traitors have been told over and over. However, the biggest story of them all remains untold—until now. Rumors have long swirled of another mole in American intelligence, one perhaps more damaging than all the others combined. Perhaps the greatest traitor in American history, perhaps a Russian ruse to tear the CIA apart, or perhaps nothing more than a bogeyman, he is often referred to as the Fourth Man.

Blowing the lid off the biggest spy story in decades, Robert Baer tells the full, gripping story for the first time. After arrest of KGB spy Aldrich Ames, the CIA launched another investigation to make sure there wasn't another double agent in its ranks. Led by three of the CIA’s best spy hunters, women who devoted their lives to counterintelligence, its existence was known only to a few. They began methodically investigating their own bosses and colleagues, turning up loose threads, suspicious activity, and shocking intelligence from the CIA’s best Russian asset. In the end, they came to a startling conclusion that, whether true or not, would shake American intelligence to its core, setting the stage for a cat-and-mouse game with enormous geopolitical stakes. Spies and moles may seem like bygone cold war history, but with Russia again a misunderstood belligerent power, the skeletons America would rather keep hidden are emerging, and as Robert Baer shows in this thrilling masterwork of investigative reporting, they matter as much now as ever.

Robert Baer, one of the most accomplished officers in CIA history, is a bestselling author and intelligence analyst for CNN. Over several decades, he served everywhere from Iraq to New Delhi and was awarded the Career Intelligence Medal for his efforts. Baer is the author of four New York Times bestsellers, including his first book, See No Evil, the basis for the Academy Award-winning film Syriana. He is considered one of the world's foremost authorities on the Middle East and frequently appears on all major news outlets. Baer has contributed to TIME, Vanity Fair, The Wall Street Journal, and The Washington Post.

"A gripping and mind-bending read."—Daily Beast

"If you want a good thriller to read, here it is: The Fourth Man by Bob Baer,"—Erica Hill, CNN New Day

"Fascinating stuff from one of the best experts on this in the business."—Jim Acosta, CNN