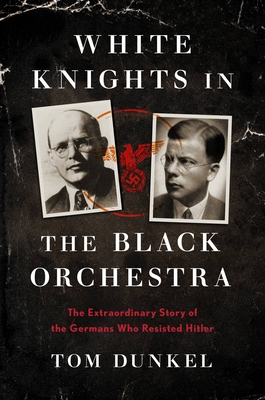 They were a small group of conspirators who risked their lives by plotting relentlessly to obstruct and destroy the Third Reich from within. The Gestapo nicknamed this shadowy confederation of traitors the “Black Orchestra.” This is their tension-filled story.

As the “Final Solution” unfolds, a loose network of German military officers, diplomats, politicians, and civilians are doing everything in their power to undermine the Third Reich from the inside: reporting troop movements to the Allies, feeding disinformation to the Nazi high command, plotting to assassinate Adolf Hitler, and more. The Gestapo nicknames this shadowy confederation of traitors the “Black Orchestra.” Its players include Dietrich Bonhoeffer, a dissident Lutheran pastor, and his brother-in-law Hans von Dohnanyi, a staff attorney at the Abwehr, the German military intelligence service.

In this tension-filled narrative, Tom Dunkel traces the perilous movements of these “white knights” as they and their families face constant danger of being exposed and executed. Some act out of moral outrage and patriotism. Some want to atone for their own Nazi sins. When their treasonous activities are finally discovered, Hitler’s SS and the Gestapo are hell-bent on taking bloody revenge as the end of the war rapidly approaches and lives hang in the balance.

White Knights in the Black Orchestra is a tautly written, meticulously reported account of men and women heroically resisting Hitler’s ruthless regime. It packs the punch of the best espionage thrillers, but the cat-and-mouse drama and plot twists are grounded firmly in fact. This is a stirring story of people willing to risk all by doing the right thing in a country gone mad, a story that may prompt readers to ask themselves “What would I have done?”

Tom Dunkel is a Washington, DC-based journalist and author, a former staff features writer at The Baltimore Sun, and a long-time freelancer for publications ranging from The Washington Post Magazine (where his byline has appeared for more than twenty years) and The New York Times Magazine, to Sports Illustrated and Smithsonian. His first book, Color Blind, was published in 2013 by Grove/Atlantic.

“White Knights in the Black Orchestra is the absolutely riveting story of what true courage looks like when principled men and women risk their lives to confront evil. What’s more, it is incredibly relevant to our world today.”—Robert J. Mrazek, award-winning author of The Indomitable Florence Finch and A Dawn Like Thunder

“White Knights in the Black Orchestra is a much needed book whose meaning runs deep. History doesn’t repeat, but it does rhyme. At a time when everything was at stake in the world, when lies stole truth, when madness became power, men and women of faith and principles fought back. America today is experiencing what I call its ‘Bonhoeffer Moment.’ Read this book and, most importantly, reflect deeply upon it. Tom Dunkel’s account of the Germans who resisted Hitler is not just about then, but also now.”—Jim Wallis, Chair in Public Policy and Director of the Center for Faith and Justice at Georgetown University

“Tom Dunkel has written a timely book about great courage, both moral and physical, in the face of evil government. He has used exceptional research and the gifts of a thriller writer to uncover an important part of the war against Hitler. Both a fast-paced narrative and a moving tribute to some remarkable men and women.”—Richard Cohen, author of Making History and By the Sword

“A highly readable and timely account of Germans who resisted Nazism. Veteran journalist Tom Dunkel paints a comprehensive and compelling mural of the who, what, when and why of political courage that should be read by Americans today.”—Helen Epstein, author of Children of the Holocaust and Where She Came From

"Tom Dunkel’s White Knight in the Black Orchestra is a book for our times, when political expediency and immorality in the service of ambition have become commonplace. This story of the decent, principled Germans who resisted the Nazis at peril for their lives is meticulously researched, elegantly told, and an imperative, tragically timely tale."—Gene Weingarten, two-time Pulitzer Prize-winning journalist, columnist and author

"Dunkel...frames the suspenseful narrative around the work and family of Dietrich Bonhoeffer...A thoroughgoing history of indispensable purveyors of active and passive resistance in Nazi Germany."
—Kirkus Reviews

"Dunkel’s nonfiction narrative is surprisingly suspenseful, as well as elegantly written…. White Knights in the Black Orchestra is a tale of great heroism…. Because the German resistance failed to stop Hitler…the tremendous courage they displayed often has been overlooked. Dunkel’s book is a stirring corrective."—The Forward

"A fascinating look at the brave 'White Knights' — a loose network of German military officers, diplomats, politicians, and civilians who risked their lives to undermine the Third Reich, from reporting troop movements to the Allies to plotting to assassinate Hitler."—New York Post, naming White Knights one of the best books of Fall 2022