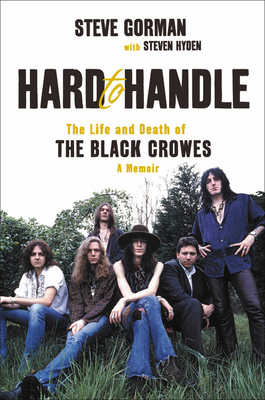 Black Crowes drummer and cofounder Steve Gorman shares the band's inside story in this behind-the-scenes biography, from their supernova stardom in the '90s to exhilarating encounters with industry legends.
For more than two decades, the Black Crowes topped the charts and reigned supreme over the radio waves, even as hair bands, grunge, and hip-hop threatened to dethrone them. With hits like "Hard to Handle," "She Talks to Angels," and "Remedy," their massive success launched them to stardom in the early '90s, earning them a place among rock royalty. They were on the cover of Rolling Stone, MTV played their videos 24/7, and Generation X rediscovered the power of classic rock and blues by digging into multi-platinum classics like Shake Your Money Maker and The Southern Harmony and Musical Companion.
But stardom can be fleeting. For the Black Crowes, success slowly dwindled as the band members got caught up in the rock star world and lost sight of their musical ambition. Despite the drinking, drugs, and incessant fighting between Chris and Rich Robinson -- the angriest brothers in rock and roll, with all due respect to Oasis and the Kinks -- the band continued to tour until 2013. On any given night, they could be the best band you ever saw (or the most combative). Then, one last rift caused by Chris Robinson proved insurmountable for the band to survive. After that, the Black Crowes would fly no more.
Founding member Steve Gorman was there for all of it -- the coke- and weed-fueled tours; the tumultuous recording sessions; the backstage hangs with legends like Robert Plant, Jimmy Page, and the Rolling Stones. As the band's drummer and voice of reason, he tried to keep the Black Crowes together musically and emotionally. In Hard To Handle -- the first account of this great American rock band's beginning, middle, and end -- Gorman explains just how impossible that job was with great insight, candor, and humor. They don't make bands like the Black Crowes anymore: crazy, brilliant, self-destructive, inspiring, and, ultimately, not built to last. But, man, what a ride it was while it lasted.

Steve Gorman is a founding member of the Black Crowes as well as his current band, Trigger Hippy. He has created and hosted two nationally syndicated radio shows. Hard to Handle is his first book. He lives in Nashville with his family.

Steven Hyden is the author of Your Favorite Band Is Killing Me and Twilight of the Gods. His work has also appeared in the New York Times Magazine, Washington Post, Billboard, Rolling Stone, Grantland, The. A.V. Club, Uproxx, and The Ringer.

"One of the year's most buzzed-about rock bios!"—JamBase

"Bands are beautiful fragile toxic things--always one wrong glance or argument away from falling apart. Steve manages to tell the tale of the internal turmoil of the Black Crowes, in all its sordid detail, without ever getting finger-pointy about it. I honestly couldn't put it down. Made me nostalgic, sad, and happy too."—Chris Shiflett, lead guitarist of Foo Fighters

"Reading this book brought me back to a time that rock and roll mattered to me more than almost anything else. I was at some of the early Black Crowes gigs depicted here, and the book is so well drawn, that I could not only hear the music again, but smell the sweat coming off the band and crowd as clearly as I did back then. This is Almost Famous, told by the guy behind the drums, who remembers every chord change, every fight, every song's journey from demo to record to live performance. Essential reading for rock fans everywhere."—Brian Koppelman, co-creator and showrunner of Billions

"Hard to Handle is an amazing and a lot of times uncomfortably candid account of Steve's time in the Black Crowes. The opportunities presented and then lost. The ups and downs. The fights. The fuck ups. This book is literally the Angela's Ashes of rock memoirs. Every time things seem to be looking up for the band an insane decision, comment or substance seems to drive the band right into a ditch, only to see them somehow use that negative momentum to then attain a new level of success. I absolutely loved this book. Can't wait for the movie!"—Bill Burr, comedian

"I couldn't put the book down--absolutely unbelievable read! Now I know why I was lucky to play tennis; I didn't have to deal with anyone except myself!"—John McEnroe, New York Times bestselling author of But Seriously and You Cannot Be Serious

"A raw, intimate portrait of the band vividly unfolds
as Gorman recounts his history with the Crowes, from their conception to their
final days. While this is a familiar tale in some ways, Gorman sidesteps the
usual clichees. The book is a reminder of the band's wide-ranging talent and
great music... Gorman has written a brutally honest, deeply personal
memoir of the group he helped to create. A must for fans of the Black Crowes
and American rock and roll."—Library Journal

"Insightful and explosive....almost every page has some
sort of jaw-dropping revelation...and Gorman was there from the very beginning to
the last downbeat."—The Houston Press