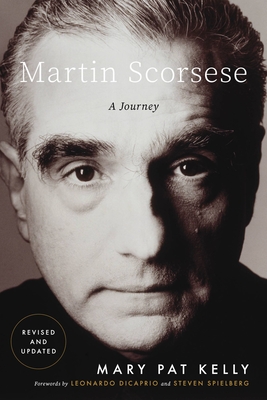 In time for Scorsese’s 80th birthday and the release of Killers of the Flower Moon, a new edition of the seminal oral history tracing Scorsese’s journey from young filmmaker to legend, featuring a foreword by Steven Spielberg

Few filmmakers, if any, make the kind of impact that Martin Scorsese has made on American cinema. The winner of every prestigious film award, including the Oscar, Scorsese is a living legend. Bestselling author and award-winning filmmaker Mary Pat Kelly’s groundbreaking biography reveals how this working-class boy from Manhattan’s Little Italy became one of our most acclaimed, celebrated, and influential filmmakers.

Martin Scorsese: A Journey maps Scorsese’s personal and artistic evolution though his films, from early works like student films and Mean Streets through cinematic masterpieces like Taxi Driver, Raging Bull,The King of Comedy,Goodfellas. Across interviews with Scorsese himself; stars like Robert De Niro, Paul Newman, Liza Minelli, and Nick Nolte; colleagues including screenwriters and cinematographers; as well as family and friends, it reveals the story of a man in a way that only his community and fellow artists can, giving us unprecedented, intimate access to the making of these iconic films and the extraordinary mind behind them. Brimming with insight into Scorsese’s life, values, process, humor, and inspirations, it is a remarkable account of America’s premiere director, the shepherd of countless imaginations.

Mary Pat Kelly is the best selling author of Galway Bay, the first in a trilogy of Irish American historical fiction that includes Of Irish Blood and Irish Above All. She has published another novel, Special Intentions, as well as five nonfiction books. She wrote and directed the critically acclaimed feature film, Proud, starring Stephen Rea and Ossie Davis as well as a series of award-winning documentaries for PBS. She worked on the television shows Good Morning, America and Saturday Night Live and was a screenwriter for both Paramount and Columbia Pictures.

Irish America magazine twice named her one of the top 100 Irish Americans as well as one of the top global Irish and placed her in the inaugural class of the top 50 Power Women. She graduated from Saint Mary-of-the-Woods College, attended NYU Film School and received a PhD from the CUNY Graduate Center.

Born and raised in Chicago, she lives on New York’s Upper West Side with her husband, web developer Martin Sheerin, from County Tyrone.