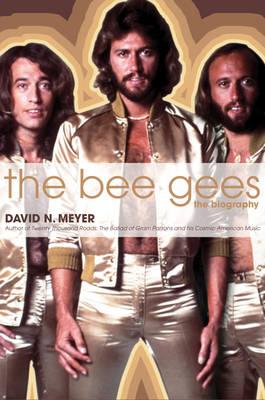 The first narrative biography of the Bee Gees, the phenomenally popular vocal group that has sold more than 200 million records worldwide -- sales in the company of the Beatles and Michael Jackson. The Bee Gees is the epic family saga of brothers Barry, Robin, and Maurice Gibb, and it's riddled with astonishing highs—especially as they became the definitive band of the disco era, fueled by Saturday Night Fever and crashing lows, including the tragic drug-fueled downfall of youngest brother, Andy. In recent years, a whole new generation of fans has rediscovered the undeniable grooves and harmonies that made the Bee Gees and songs like Stayin' Alive, How Deep is Your Love, To Love Somebody, and I Started a Joke timeless.

David N. Meyer's book, Twenty Thousand Roads: The Ballad of Gram Parsons and His Cosmic American Music, was named by the Los Angeles Times as one of the 20 Best Nonfiction Books of the Year. Rolling Stone selected it as one of the Five Best Books of the Year. His other books include The 100 Best Films to Rent You've Never Heard Of and A Girl and a Gun: The Complete Guide to Film Noir on Video.

Publishers Weekly, 6/3/13 “[An] exhaustive biography…The author is a fan, but he doesn't hesitate to be critical”

Examiner.com, 7/16/13
“Meyer, a film aficionado and Gram Parsons biographer, makes a compelling case for one of the world's best-selling (and most understood) bands…The author delves into exquisite detail…The Bee Gees: The Biography is a fascinating, historically significant retrospective of one of popular music's most enduring—yet maligned—acts.”

Sunday Daily Mail (UK), 7/21/13
“By concentrating on the music, it might help give the Bee Gees the recognition as songwriters they so justly deserve.”

Houston Press, 7/30/13
“Does what Meyer intended it to: restore some respect and luster to a family band whose music is incredibly ingrained in a lot of people's everyday listening, embodied with craftsmanship, and far more than just a ‘disco group.'”

Record Collector, 9/1/13
“[An] engrossing account of the life and times of the brothers Gibb… It's an emotive read, celebrating some truly enduring music (a quarter of a billion sales can't lie), while pondering where the band fit into a bigger showbiz picture.”