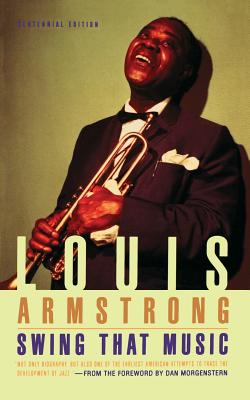 Not only biography, but also one of the earliest American attempts to trace the development of jazz."--from the foreword by Dan Morgenstern

The first autobiography of a jazz musician, Louis Armstrong's Swing That Music is a milestone in jazz literature. Armstrong wrote most of the biographical material, which is of a different nature and scope than that of his other, later autobiography, Satchmo: My Life in New Orleans (also published by Da Capo). Satchmo covers in intimate detail Armstrong's life until his 1922 move to Chicago; but Swing That Music also covers his days on Chicago's South Side with "King" Oliver, his courtship and marriage to Lil Hardin, his 1929 move to New York, the formation of his own band, his European tours, and his international success. One of the most earnest justifications ever written for the new style of music then called "swing" but more broadly referred to as "Jazz," Swing That Music is a biography, a history, and an entertainment that really "swings."

Louis Armstrong (1901-1971) was an American trumpeter, composer, singer, and occasional actor who was one of the most influential figures in jazz. His career spanned five decades, from the 1920s to the 1960s, and different eras in the history of jazz. In 2017, he was inducted into the Rhythm & Blues Hall of Fame.