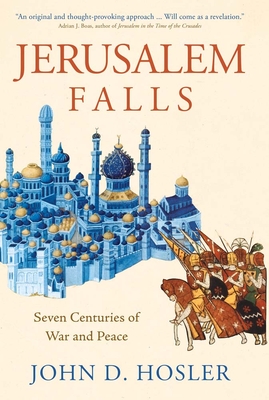 The first full account of the medieval struggle for Jerusalem, from the seventh to the thirteenth century

The history of Jerusalem is one of conflict, faith, and empire. Few cities have been attacked as often and as savagely. This was no less true in the Middle Ages. From the Persian sack in 614 through the bloody First Crusade and beyond, Jerusalem changed hands countless times. But despite these horrific acts of violence, its story during this period is also one of interfaith tolerance and accord.

In this gripping history, John D. Hosler explores the great clashes and delicate settlements of medieval Jerusalem. He examines the city’s many sieges and considers the experiences of its inhabitants of all faiths. The city’s conquerors consistently acknowledged and reinforced the rights of those religious minorities over which they ruled. Deeply researched, this account reveals the way in which Jerusalem’s past has been constructed on partial histories—and urges us to reckon with the city’s broader historical contours.

John D. Hosler is professor of military history at the Command and General Staff College. His previous books include John of Salisbury and The Siege of Acre, which was a Financial Times Book of the Year.

“Hosler is a sure guide to this winding story. . . . This is an intriguing and occasionally eye-opening account of the Middle Ages’ most alluring city.”—Dan Jones, Sunday Times

“Unwaveringly evenhanded, Hosler succeeds in constructing a plausible and surprising counternarrative to histories of Jerusalem focused on violence and conquest. A fresh perspective elevates this sharp chronicle.”—Publishers Weekly