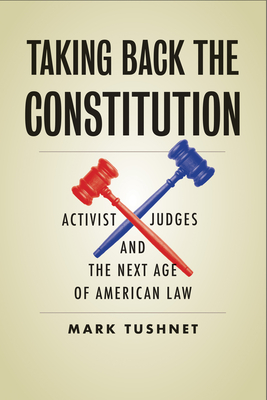 By Mark Tushnet
for information about purchasing this book, please contact orders@bookpassage.com

What Supreme Court justices do is far more than just “calling balls and strikes.” The Court has never simply evaluated laws and arguments in light of permanent and immutable constitutional meanings. Social, moral, and yes, political ideas have always played into the justices’ impressions of how they think a case should be decided. Mark Tushnet traces the ways constitutional thought has evolved, from the liberalism of the New Deal and the Great Society to the Reagan conservatism that has been dominant since the 1980s. Looking at the current crossroads in the constitutional order, Tushnet explores the possibilities of either a Trumpian entrenchment of the most extreme ideas of the Reagan philosophy, or a dramatic and destabilizing move to the left. Wary of either outcome, he offers a passionate and informed argument for replacing judicial supremacy with popular constitutionalism—a move that would restore to the other branches of government a role in deciding constitutional questions.

Mark Tushnet is William Nelson Cromwell Professor of Law at Harvard Law School. His previous books include Why the Constitution Matters and In the Balance: Law and Politics on the Roberts Court.

“Tushnet presents a thought-provoking discussion of the power and persuasion of the U.S. Supreme Court in its current conservative iteration.”—Judy C. Janes, Law Library Journal

“Tushnet persuasively demonstrates how judges’ preexisting views influence how they decide cases. He rightly calls for a reinvigoration of the role of Congress and the public in constitutional decision-making.”—Caroline Fredrickson, author of The Democracy Fix and Under the Bus

"Readers will find Mark Tushnet's new book bracing, exhilarating, and (for some) maddening. It is controversial in the best way, providing a framework for specific arguments (like court-packing) that many readers will have encountered but perhaps not considered systematically."—Josh Chafetz, author of Congress's Constitution