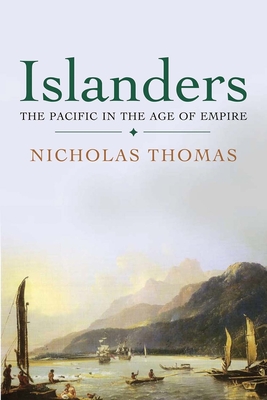 An incisive, evocative history of the experience of empire in the Oceanic world

This compelling book explores the lived experience of empire in the Pacific, the last region to be contacted and colonized by Europeans following the great voyages of Captain Cook. Unlike conventional accounts that emphasize confrontation and the destruction of indigenous cultures, Islanders reveals there was gain as well as loss, survival as well as suffering, and invention as well as exploitation.

Empowered by imaginative research in obscure archives and collections, Thomas rediscovers a rich and surprising history of encounters, not only between Islanders and Europeans, but among Islanders, brought together in new ways by explorers, missionaries, and colonists. He tells the story of the making of empire, not through an impersonal survey, but through vivid stories of the lives of men and women—some visionary, some vicious, and some just eccentric—and through sensuous evocation of seascapes and landscapes of the Pacific. A fascinating re-creation of an Oceanic world, Islanders offers a new paradigm, not only for histories of the Pacific, but for understandings of cultural contact everywhere.

Nicholas Thomas is director of the Museum of Archaeology and Anthropology, and professor of historical anthropology, at Cambridge University, and has traveled widely in the Pacific. Among his books is Discoveries: The Voyages of Captain Cook.

"Thomas’ description of the journey into the imperial world of the Pacific is made inclusive and companionable with lovely asides… [a] comprehensive but gripping book"—Katrina Schlunke, Times Higher Education Supplement
— Katrina Schlunke

"Islanders is not only a fine work of scholarship but also a lucid and engrossing read."—Rod Edmond, BBC History Magazine
— Rod Edmond

“The islanders’ minds and feelings may be inaccessible in purely anthropological terms, but Thomas provides ample evidence to allow readers to fill in the gaps.”—Dr. Andrew Rudd, Church Times
— Dr. Andrew Rudd

"Intellectually sophisticated and clearly written, this first-rate study of the experience of the Pacific Islanders provides one of the best available studies of the nature of imperial contact and violence, and of the traumas they caused.”—Jeremy Black, University of Exeter

"We are used to idea of thinking of the Pacific in the age of exploration and empire as a play-pond for the greed, ambition and curiosity of Europeans, but now Nicholas Thomas has produced a bracing revision that - Antipodean-like - inverts many of our assumptions about the Islanders that they supposedly discovered and exploited. Drawing on a lifetime of research, and in vivid sinewy prose, he brings to life an unknown world of Islander explorers, adventurers, traders, sailors, whalers, warriors, priests and migrants - peoples who criss-crossed every ocean and whose stories have never made it into Hakluyt or any voyage anthology. Surely it is these Pacific Islanders, rather than we European intruders, who deserve to be seen as the world's first cosmopolitans." - Iain McCalman, author of Darwin's Armada: Four Voyages and the Battle for the Theory of Evolution
— Iain McCalman

“Islanders tells the compelling, sometimes shocking, story of the western world's impact on the peoples of Oceania before 1900. Using all the evidence now available, Thomas shows that the lives of individuals, both Pacific islanders and European newcomers, were profoundly altered as the contact became more persistent and intrusive. Explorers, missionaries, traders and officials jostled for status and profit in their relationship with islanders - chiefly, priestly and otherwise - who in turn pursued their own interests in the years before catastrophic population decline changed the islands for ever. Islanders will appeal to specialists and non-specialists alike as a scintillating contribution not only to Pacific history, but to the general study of relations between European and non-European peoples.” - Glyn Williams, author of The Great South Sea
— Glyn Williams

"Beautifully written, with spell-binding vignettes. An important, original controbution to our knowledge of life in the Pacific." - Dame Anne Salmond, author of The Trial of the Cannibal Dog: Captain Cook in the South Seas
— Anne Salmond

“Thomas has written a work of scholarship that merits close attention and, at the same time, that presumes a ready grasp of the vast geography of the Pacific. His analysis is thoughtful and often thought-provoking.”—Tim Severin, Irish Examiner
— Tim Severin