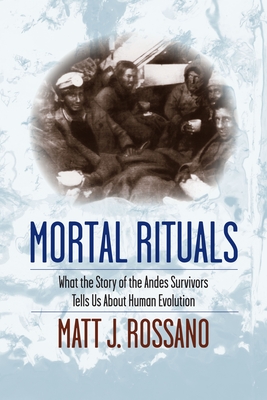 On December 21, 1972, sixteen young survivors of Uruguayan Air Force Flight 571 were rescued after spending ten weeks stranded at the crash site of their plane, high in the remote Andes Mountains. The incident made international headlines and spawned several best-selling books, fueled partly by the fact that the young men had resorted to cannibalism to survive. Matt Rossano examines this story from an evolutionary perspective, weaving together findings and ideas from anthropology, psychology, religion, and cognitive science. During their ordeal, these young men broke "civilized" taboos to fend off starvation and abandoned "civilized" modes of thinking to maintain social unity and individual sanity. Through the power of ritual, the survivors were able to endure severe emotional and physical hardship. Rossano ties their story to our story, seeing in the mortal rituals of this struggle for survival a reflection of what it means to be human.

Matt J. Rossano is professor of psychology at Southeastern Louisiana University. He earned his Ph.D. at the University of California, Riverside, and is the author of Supernatural Selection: How Religion Evolved and Evolutionary Psychology: The Science of Human Behavior and Evolution. He blogs for the Huffington Post and Psychology Today on religion, science, evolution, and human behavior.