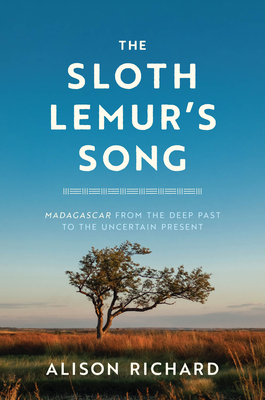 A moving account of Madagascar told by a researcher who has spent over fifty years investigating the mysteries of this remarkable island.

Madagascar is a place of change. A biodiversity hotspot and the fourth largest island on the planet, it has been home to a spectacular parade of animals, from giant flightless birds and giant tortoises on the ground to agile lemurs leaping through the treetops. Some species live on; many have vanished in the distant or recent past. Over vast stretches of time, Madagascar’s forests have expanded and contracted in response to shifting climates, and the hand of people is clear in changes during the last thousand years or so. Today, Madagascar is a microcosm of global trends. What happens there in the decades ahead can, perhaps, suggest ways to help turn the tide on the environmental crisis now sweeping the world.

The Sloth Lemur’s Song is a far-reaching account of Madagascar’s past and present, led by an expert guide who has immersed herself in research and conservation activities with village communities on the island for nearly fifty years. Alison Richard accompanies the reader on a journey through space and time—from Madagascar’s ancient origins as a landlocked region of Gondwana and its emergence as an island to the modern-day developments that make the survival of its array of plants and animals increasingly uncertain. Weaving together scientific evidence with Richard’s own experiences and exploring the power of stories to shape our understanding of events, this book captures the magic as well as the tensions that swirl around this island nation.

Alison Richard is the Crosby Professor of the Human Environment emerita and senior research scientist at Yale University. She previously served as Vice Chancellor of the University of Cambridge, and in 2010, she was awarded a DBE (Dame Commander of the British Empire) for her services to higher education.

“Full of wonder and forensic intelligence, The Sloth Lemur’s Song is a love song to the astonishing evolution of Madagascar. It is a fascinating journey from the island’s origins to the complex tensions of the present day, with Alison Richard the most considerate and engaging of guides.”
— Isabella Tree, author of 'Wilding: Returning Nature to Our Farm'

“This book is an encyclopedia of wonders, but it’s also a riveting story of evolution through time in a land utterly unique. Madagascar is arguably the most amazing place on Earth. Richard knows it as few outsiders ever will, and its praises have never been better sung.”
— David Quammen, author of 'Spillover'

“With deep reflections about a culture immersed in bountiful nature, Richard guides the reader through Madagascar’s transformations over millions of years. Through her research and experience on the island, Richard reminds us what was lost, what remains, and what is under threat—unless we act.”
— Yolanda Kakabadse, former president, World Wildlife Fund International

“Richard shares her long experience, deep knowledge, and sincere and uncompromising passion for Madagascar, its people, and the history of its biodiversity. The Sloth Lemur’s Song is essential reading for anyone who is passionate about Madagascar's people and nature, curious about its past and interested in its future.”
— Olivier Langrand, executive director, Critical Ecosystem Partnership Fund

“Richard's book can best be summarized as a love story; an ode to Madagascar. Throughout, the author interweaves first-person accounts of her extensive experience as a field biologist, detailed and accurate accounts of the natural history of the island, up-to-the-minute summaries of the latest scientific studies spanning everything from botany to geology to climatology, with the binding ‘through line’ of the Malagasy people and their relationship to the landscape.”
— Anne Yoder, Duke University

"Drawing together a mix of storytelling and scientific prose, Richard has written an up-to-date compilation of what is known about Madagascar's geology, evolution, ecology, human communities, and conservation challenges, including due attention to cultural and political factors. This book is an important contribution to efforts to educate stakeholders, scientists, students, and the public, and to conserving Madagascar's biodiversity. Highly Recommended."
— Choice

"Alison Richard's book is about the stories told about Madagascar, its people, and its nature . . One of the stories that threads through the book is her story, and how her interactions with the Malagasy people and their environment provided the insights and knowledge that have shaped her understanding. Her interviews with colleagues, from a range of scientific disciplines, provide clues, many of them less than definitive, about the environmental history of Madagascar. Informants, colleagues, confidantes instruct and inform the ideas in this book."
— Biological Conservation