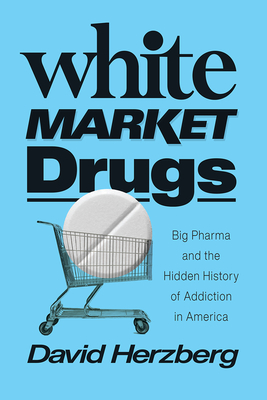 The contemporary opioid crisis is widely seen as new and unprecedented. Not so. It is merely the latest in a long series of drug crises stretching back over a century. In White Market Drugs, David Herzberg explores these crises and the drugs that fueled them, from Bayer’s Heroin to Purdue’s OxyContin and all the drugs in between: barbiturate “goof balls,” amphetamine “thrill pills,” the “love drug” Quaalude, and more. As Herzberg argues, the vast majority of American experiences with drugs and addiction have taken place within what he calls “white markets,”  where legal drugs called medicines are sold to a largely white clientele.

These markets are widely acknowledged but no one has explained how they became so central to the medical system in a nation famous for its “drug wars”—until now. Drawing from federal, state, industry, and medical archives alongside a wealth of published sources, Herzberg re-connects America’s divided drug history, telling the whole story for the first time. He reveals that the driving question for policymakers has never been how to prohibit the use of addictive drugs, but how to ensure their availability in medical contexts, where profitability often outweighs public safety. Access to white markets was thus a double-edged sword for socially privileged consumers, even as communities of color faced exclusion and punitive drug prohibition. To counter this no-win setup, Herzberg advocates for a consumer protection approach that robustly regulates all drug markets to minimize risks while maintaining safe, reliable access (and treatment) for people with addiction.
Accomplishing this requires rethinking a drug/medicine divide born a century ago that, unlike most policies of that racially segregated era, has somehow survived relatively unscathed into the twenty-first century.

By showing how the twenty-first-century opioid crisis is only the most recent in a long history of similar crises of addiction to pharmaceuticals, Herzberg forces us to rethink our most basic ideas about drug policy and addiction itself—ideas that have been failing us catastrophically for over a century.

David Herzberg is associate professor of history at the University at Buffalo. He is the author of Happy Pills in America: From Miltown to Prozac.

“Herzberg traces historical shifts from medicalization to criminalization and back. He carefully outlines the multiple factors that led to reckless opioid prescribing around the turn of the millennium and . . .  argues effectively for policies to limit the distorting effect of profit-motivated drug provision. This could include everything from decriminalizing illicit drugs to nationalizing Big Pharma: turning drug companies into public utilities.”
— Globe and Mail

“Herzberg traces historical shifts from medicalization to criminalization and back. He carefully outlines the multiple factors that led to reckless opioid prescribing around the turn of the millennium and . . .  argues effectively for policies to limit the distorting effect of profit-motivated drug provision. This could include everything from decriminalizing illicit drugs to nationalizing Big Pharma: turning drug companies into public utilities.”
— The Globe and Mail

“At the start of White Market Drugs, Herzberg laments that ‘pharmaceutical opioids do not yet have their historian.’ They do now. He has presented a careful and comprehensive chronicle spanning more than a century.”
— Wall Street Journal

“In the style of a classic work of alternative history, Herzberg’s White Markets reminds us that over the last 150 years, pharmaceutical boom and bust cycles have continually hit small towns and communities across America.”
— New Republic

“White Market Drugs examin[es] the troubled history of psychoactive drugs in America. Herzberg considers licit and illicit drugs together, arguing that the marketing of medicine relies on the stigmatization and criminalization of those who consume drugs outside the medical system; the development of America’s gargantuan pharmaceutical markets must be understood alongside the growth of the illicit drug market. His choice of the phrase ‘white market’ to describe pharmaceuticals reflects the racial bias that has been baked into this system from the start.”

"Herzberg argues that the vast majority of American experiences with drugs and addiction have taken place within what he calls “white markets,” where legal drugs—i.e., medicine—are sold to a largely white clientele. He advocates for a consumer protection approach that regulates all drug markets while caring for people with addiction by ensuring they have safe, reliable access to medication-assisted treatment. Accomplishing this, Herzberg explains, would require rethinking a racially segregated drug/medicine divide."
— Publishers Weekly

“White Market Drugs provides essential backstory for a string of Pharma-stoked drug crises. Reading Herzberg, you can see the prescription opioid addiction epidemic coming from a mile away. This book is a powerful prequel to the body of investigative reporting on what now seems like the worst scandal in US medical history.”
— David T. Courtwright, author of Dark Paradise and The Age of Addiction

“David Herzberg’s White Market Drugs is a fantastic book that tells the history of addictive pharmaceuticals in the United States since the late 19th century through the current ‘twin crises’ of opioid addiction and mass incarceration of racial minorities. It is the first book to provide a comprehensive history of addictive pharmaceuticals and show how imbricated that history is within the broader history of addiction, drug policy, and health care in America.”
— Dominique Tobbell, author of Pills, Power, and Policy: The Struggle for Drug Reform in Cold War America and Its Consequences

"In this sweeping analysis of a century of US drug policy, Herzberg asks why our clinical, carceral, public health, and police responses to addictive substances have hinged on the false dichotomy between dangerous drugs and legitimate pharmaceuticals—and shows how this distinction has always had more to do with the politics of respectability than any underlying principles of pharmacology. Meticulously researched and clearly written, White Market Drugs provides not only an indictment of the failures of the present but also a roadmap for reducing harm in the future: a must-read for all concerned with the human toll of America’s long and costly wars on drugs."

— Jeremy Greene, author of Generic: The Unbranding of Modern Medicine

“[Herzberg has a] fantastic eye for politically led motives. . . [he] provides brilliant lessons on white-market policy.”
— The British Journal for the History of Science

“What Herzberg does best is put flesh on the bones of drug consumers on both sides of the great divide—teaching us that the vast majority of drug users are white, middle-class consumers in the midst of the ‘white market apocalypse.
— Journal of Social History

Herzberg’s masterful book  . .  . brings together novel theoretical framing, profound policy analysis, and attention to the narratives of those most intimately affected by these policies. He offers a promising framework to address the many challenges in our current drug policies. Policymakers would be well served to take notice of this book."
— Journal of the History of Medicine and Allied Sciences