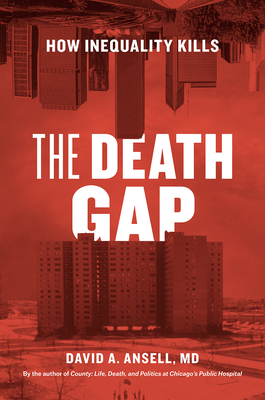 By David A. Ansell, MD
Out of Print

We hear plenty about the widening income gap between the rich and the poor in America and about the expanding distance separating the haves and the have-nots. But when detailing the many things that the poor have not, we often overlook the most critical—their health. The poor die sooner. Blacks die sooner. And poor urban blacks die sooner than almost all other Americans. In nearly four decades as a doctor at hospitals serving some of the poorest communities in Chicago, David A. Ansell, MD,  has witnessed firsthand the lives behind these devastating statistics. In The Death Gap, he gives a grim survey of these realities, drawn from observations and stories of his patients.

While the contrasts and disparities among Chicago’s communities are particularly stark, the death gap is truly a nationwide epidemic—as Ansell shows, there is a thirty-five-year difference in life expectancy between the healthiest and wealthiest and the poorest and sickest American neighborhoods. If you are poor, where you live in America can dictate when you die. It doesn’t need to be this way; such divisions are not inevitable. Ansell calls out the social and cultural arguments that have been raised as ways of explaining or excusing these gaps, and he lays bare the structural violence—the racism, economic exploitation, and discrimination—that is really to blame. Inequality is a disease, Ansell argues, and we need to treat and eradicate it as we would any major illness. To do so, he outlines a vision that will provide the foundation for a healthier nation—for all.

Inequality is all around us, and often the distance between high and low life expectancy can be a matter of just a few blocks. But geography need not be destiny, urges  Ansell. In The Death Gap he shows us how we can face this national health crisis head-on and take action against the circumstances that rob people of their dignity and their lives.

David A. Ansell, MD, is the senior vice president and associate provost for community health equity as well as the Michael E. Kelly Professor of Medicine at Rush University Medical Center in Chicago. He is the author of County: Life, Death, and Politics at Chicago’s Public Hospital.

"Compelling. . . . Without providing easy answers, Ansell challenges readers to be aware of health disparities and to work toward equality."

"This passionate polemic uses powerful patient stories to highlight the importance of neighbourhood conditions, healthcare inequalities and poverty in explaining the health gap between black and white Americans. Drawing on detailed case studies of racial inequalities in breast cancer mortality, the health consequences of mass imprisonment, immigration status and access to healthcare, the Chicago heatwave and Hurricane Katrina, Ansell vividly unpicks a spider’s web of causality. . . . This is a wide-ranging and very important book. Easy to read and engaging, it makes the social determinants come alive."
— Clare Bambra

"Ansell's passionately written The Death Gap presents a powerful case for social inequality as a cause of disease and disparities in health. . . . Moving beyond epidemiological frameworks that model what would happen to an individual exposed to a single causal factor, Ansell weaves a much more complicated story, in which structures of disadvantage affect every step of the process of survival. The Death Gap provides an overarching framework for understanding the root cause of ethno-racial and economic disparities in illness that seamlessly weaves together the very best research in epidemiology, public health, medical sociology, health policy and psychology."
— Nature

"Ansell does a great job of showing that poverty is not simply a lack of money, but also a major health and death risk. I would recommend this book to healthcare providers, policymakers, and the general public. Readers will gain knowledge of the health struggles that those in poverty-stricken neighborhoods face, and some of the structural issues that cause these problems. Ansell does not shy away from offering even radical solutions. We would be wise to take him seriously."
— Poverty & Public Policy

“Ansell does a magnificent job of uncovering the myriad ways in which structural racism — in housing, employment, education, and health care, for a start — creates unacceptable ‘death gaps’ or disparities in life expectancy that are preventable and therefore morally unacceptable.  This moving study delivers the harsh truth about the ways that racism infects our nation’s health care system, and it does so with passion and eloquence.  One comes away from Death Gap feeling inspired to act, and that’s a rare and wonderful accomplishment.”
— Beryl Satter, author of Family Properties: How the Struggle over Race and Real Estate Transformed Chicago and Urban America

“The Death Gap describes critical health inequalities in the United States, which are drawn from Ansell’s  gripping first-person experiences as a leading practitioner operating in Chicago’s medical safety net. He reveals the profound inequalities, particularly racial inequalities, that generate tremendous differences in lifespan and well-being across neighborhoods, and he provides powerful patient anecdotes that provide a human face to otherwise abstract challenges.”

"How race and class affect health is demonstrated by a single statistic: Black women are 40 percent more likely to die from breast cancer than white women, though they develop it at the same rate... The Death Gap cites the three B’s – beliefs, behavior and biology – as the wrong explanations for health and life expectancy differences."
— Eve Ottenberg

"...a valuable and challenging book for any audience."
— Association of Professional Chaplains