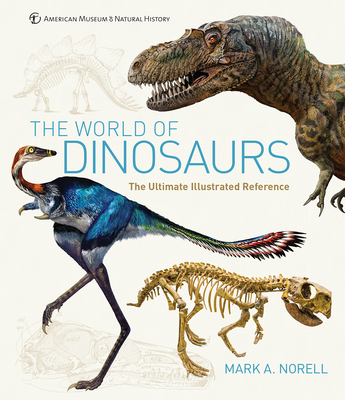 “Perhaps the easiest way to glimpse . . . all this new knowledge is to leaf through Norell’s The World of Dinosaurs. . . . One of the principal paleontologists of our time."—New York Review of Books

Dinosaurs have held sway over our imaginations since the discovery of their bones first shocked the world in the nineteenth century. From the monstrous beasts stalking Jurassic Park to the curiosities of the natural history museum, dinosaurs are creatures that unite young and old in awestruck wonder. Digging ever deeper into dinosaurs’ ancient past, science continues to unearth new knowledge about them and the world they inhabited, a fantastic time when the footprints of these behemoths marked the Earth that we humans now walk.

Who better to guide us through this ancient world than paleontologist Mark A. Norell? A world-renowned expert in paleontology, with a knowledge of dinosaurs as deep as the buried fossils they left behind, Norell is in charge of what is perhaps America’s most popular collection of dinosaur bones and fossils, the beloved displays at the American Museum of Natural History in New York. In The World of Dinosaurs, he leads readers through a richly illustrated collection detailing the evolution of these ancient creatures. From the horns of the Protoceratops to the wings of the Archaeopteryx, readers are invited to explore profiles of dinosaurs along with hundreds of color photographs, sketches, maps, and other materials—all rooted in the latest scientific discoveries—sure to both capture the imagination and satisfy a prehistoric curiosity. The World of Dinosaurs presents an astonishing collection of knowledge in an immersive visual journey that will fascinate any fan of Earth’s ancient inhabitants.

Mark A. Norell is Division Chair and Macaulay Curator, Curator-in-Charge of Fossil Amphibians, Reptiles, and Birds, Division of Paleontology at the American Museum of Natural History in New York. One of the most respected living paleontologists, Norell is a professor at Richard Gilder Graduate School, has held faculty appointments in the Department of Biology at Yale University, and has taught at Columbia University and the City University of New York.

"The transformation in what we know about [dinosaurs] is astonishing. And all of it from fossilized bones. Perhaps the easiest way to glimpse the effect of all this new knowledge is to leaf through Norell’s The World of Dinosaurs. Norell is one of the principal paleontologists of our time and a major figure at the American Museum of Natural History. In this book, he reveals the extraordinary distance between the look of actual fossils—nearly monochromatic tangles of bones—and the appearance and behavior of the creatures who left them, as reconstructed by recent research. . . . The World of Dinosaurs . . . is a reminder that our imaginations tend to normalize the strangeness of nature, and that one of the immense virtues of science is its unceasing ability to defamiliarize what we thought we knew."
— Verlyn Klinkenborg

“Dinosaur lovers who don’t have the opportunity to visit the American Museum of Natural History will welcome this volume from curator Norell. With organization modeled after the way the collection is exhibited in the museum, the work features striking photographs of fossils and bones. Intricate details about dinosaur classification, discovery, biology, and extinction will make readers feel as though they’re on the ultimate dino tour.”
— Library Journal, "Best Reference 2019"

"A publishing season wouldn’t be complete without an oversize full-color dinosaur book, and if such a book isn’t produced under the auspices of the great American Museum of Natural History, it will naturally wish it were. Such a book must be as up-to-date as the breakneck pace of paleontological developments allows; it must be as visually stunning as its subjects; and, if possible, it must be written by somebody with a CV as long as your arm. New from the University of Chicago Press is just such a book: The World of Dinosaurs by Mark Norell, the chairman of paleontology at the American Museum of Natural History (the only true must-see destination for Manhattan tourists) and one of the specialists who oversees what is surely the most impressive collection of dinosaur bones and remains and artifacts in the world. In this book—extensively illustrated with photos and drawings—Norell takes readers through the whole sprawling story of dinosaurs, organized not by geologic era but by overarching phylogenetic groupings, everything from various ceratopsians to the famous Tyrannosaurus rex and hundreds of their lesser-known kin. This author is well-practiced at conveying vast amounts of complex scientific information in a smooth and accessible narration, and as a result The World of Dinosaurs is every bit as much a delight to read as it is to page through."
— Steve Donoghue

“Norell’s latest gives readers a primer on the history of paleontology and then shifts gear to focus on a roster of iconic taxa from different clades of dinosaurs.”
— David Orr

“Norell is the paleontology curator for the American Museum of Natural History in New York and has written what is possibly the best general audience dinosaur book of 2019. This book is like a personal tour of the AMNH dinosaur collections by their chief curator who answers all your questions and regales you with all the stories of each display as he explains all about dinosaurs. Norell gives a general introduction to dinosaurs, then goes through each group of dinosaurs as represented by a few specific animals. The book is packed with high quality photos of the fossils, some of the best illustrations you will find anywhere, and top quality reproductions of old photos, maps, and charts. If you ever wanted to go to the AMNH, or even if you have and wanted to get the most out of the visit as possible, this is the book for you.”
— Paleoaerie

"Filled with fresh information and eye-catching graphics, Norell’s book guides the reader, like a birding handbook, through the two great dinosaur halls at the American Museum of Natural History in New York City. But rather than just giving vital statistics on coloration or behavior—characteristics uncertain for long-dead creatures—it focuses on the discovery history of each significant fossil and its place on the evolutionary timeline. . . . Brontosaurus and Triceratops are included, of course, but confirmed dinophiles will revel in many less-familiar species that get equal time, from 'frilled' Dilophosaurus wetherilli to Corythosaurus causarius, which wore a hollow bony crest, 'reminiscent of a Corinthian battle-helmet.'"
— Laurence A. Marschall

"This lavish, beautifully written work marks a major contribution to the popular literature on dinosaurs. . . . The book is indeed a 'tour,' offering a sweeping panorama of images that include both historical and contemporary renderings of dinosaurs and numerous photos of mounted skeletons, field sites, and historical figures. After six introductory chapters that describe what, exactly, a dinosaur is, how dinosaurs are classified, the geological time scale, and dinosaur discovery and biology, each dinosaur species on display at the AMNH is described (forty-four species in all). Two final chapters deal with the evidence that birds are a surviving form of dinosaur and describe the Cretaceous extinction that eliminated all non-avian dinosaurs. The text is relatively brief but engaging, skillfully weaving accounts of the museum's various expeditions and historical figures such as Barnum Brown and Roy Chapman Andrews, as well as giving a concise description of the characteristics of the dinosaurs themselves. Norell tells the 'story behind the story' of the various dinosaurs on display at the museum. Anyone with an interest in dinosaurs will enjoy and learn from this book. . . . Highly recommended."
— Choice

“There is a great deal to discuss, read, and explore within the pages of this beautiful, informational coffee-table book. . . . Incredible. . . . Overall, the book is exceptionally well put together, with a fantastic combination of imagery and discussion of the science behind all we know about [dinosaurs] today.”
— American Biology Teacher

"This is the kind of book I would have loved as a kid. Neither comprehensive treatise nor simple picture volume, it is a gorgeously produced large-format photographic bouquet to Dinosauria...the photographs and artistic reconstructions are both stunning and stunningly presented...It is not a book to be missed."
— David E. Fastovsky