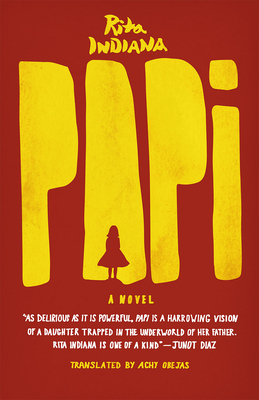 “Papi’s there, around any corner,” says the eight-year-old girl at the heart of Papi. “But you can’t sit down and wait for him cuz that’s a longer and more painful death.” Living in Santo Domingo, she waits for her father to come back from the United States and lavish her with the glorious rewards of his fame and fortune—shiny new cars and polo shirts, gold chains and Nikes. But when Papi does come back, he turns out to be more “like Jason, the guy from Friday the 13th," than a prince. Papi is a drug dealer, a man who is clearly unreliable and dangerous but nevertheless makes his daughter feel powerful and wholly, terrifyingly alive.

Drawing on her memories of a childhood split between Santo Domingo and visits with her father amid the luxuries of the United States, Rita Indiana mixes satire with a child’s imagination, horror with science fiction, in a swirling tale of a daughter’s love, the lure of crime and machismo, and the violence of the adult world. Expertly translated into English for the first time by Achy Obejas, who renders the rhythmic lyricism of Indiana’s Dominican Spanish in language that propels the book forward with the relentless beat of a merengue, Papi is furious, musical, and full of wit—a passionate, overwhelming, and very human explosion of artistic virtuosity.

Achy Obejas is a Cuban American journalist, writer, and translator. She lives in Oakland, CA, and Chicago.

“As delirious as it is powerful, Papi is a harrowing vision of a daughter trapped in the underworld of her father. Rita Indiana is one of a kind.”
— Junot Díaz

“Indiana’s genre-defying novel, her first translated into English, captures the intensity of a growing up with a drug lord for a father. . . . The prose reverberates with energy; Indiana—who is a musician as well as a writer—has a keen ear, and Obejas brilliantly transfigures her prosody into English. Deeply felt and formally inventive, Indiana’s novel crackles with intensity and oddity.”
— Publishers Weekly

“Most children believe their parents are perfect, and the realization that they aren’t typically comes as something of a shock. But the 8-year-old unnamed protagonist of Dominican writer Indiana's English-language debut is not typical. . . . As she struggles to make sense of the dysfunction, images gleaned from horror movies, science fiction, telenovelas, and fantasy collide with her lived experience. Throughout, long run-on sentences force readers to sort through a dizzying array of words, emotions, and images. Palpable pain spills forth, as do the girl's confusion, angst, and tumultuous inner life. A masterfully drawn, if sad, work of experimental coming-of-age fiction.”
— Kirkus Reviews

“Exists somewhere between dream and delirium. . . . Indiana’s stream-of-consciousness narrative creates a world like Alice’s Wonderland—if it had been set in the Dominican Republic, that is. Papi is a curiosity, apparently a cult classic in the Caribbean, while its author is a celebrated musician and something of a cult classic herself. Does that make her sui generis? Readers will decide for themselves.”
— Booklist

“Freewheeling, baroque, braggartly, and crude. For all her attempts to immortalize him, we get a far better picture of Papi through his daughter’s imitation: Papi is a cocky, mean bastard who exults in his own overabundance. In addition to being a drug lord, he’s a terrible father, but his daughter loves him. ‘My Papi has more of everything than your papi.’ A poignant debut.”
— Globe and Mail

“Papi . . . is entering the American literary scene at a ripe moment. . . .  Works of literary fiction in translation have been appearing regularly on the bestseller lists since the 2012 publication of the first of Elena Ferrante’s Neapolitan series and its intimate, visceral description of women grappling with male-dominated violence and class struggle. Papi takes on many of the same concerns, unfurling in an eight-year-old’s breathless ode to her father as she waits for his return to the Dominican Republic from the United States. The voice vibrates at a high frequency, broadcasting the braggadocio necessary to keep the precarious center of anticipation from falling out. . . . Language with such pulse and intensity, easily traceable to the author’s roots as musician, might pose a challenge for a lesser translator. . . . Readers who enjoy the book have reason to shout hallelujah . . . : Papi is just the first of the books in the ‘Trilogía de las Niñas Locas.’”
— Jac Jemc

“In this rhythmic and feverish novel, it’s hard to tell where fantasy ends and terrifying reality begins.”
— Shelf Awareness

"[One of '10 Chicago Books to Look Forward To in 2016']. . . . When a young girl’s father returns to Santo Domingo from the United States, she realizes that America doesn’t always mean Nikes and new cars. Indiana melds sci-fi and satire into a horrific coming-of-age novel about the relationship between drug dealer and child.”
— Calley Nelson

“Overlooking this slim-spine novel would be a mistake. Papi’s virtues are many, from the protagonist’s singular voice to Indiana’s rhythmic prose. . . . Papi is a fascinating portrait and an astute examination of a complex father-daughter relationship.”
— Chicago Review of Books

“Indiana is from the Dominican Republic and is I think, for me, the best novelist in the last twenty years. If you want to understand Dominican society today you have to read her books, in particular Papi, a journey about a young girl becoming an adult. This book offered a lot of images that I think at some point I use in my works.”
— Jorge Pineda

“At times, reading Papi feels like a roll through the tumble cycle of a sweaty child’s fever dream. Probably intentionally, it’s still difficult to weigh anchor amid the tumult. But whatever hang-ups this difficulty may present, the book allays with its slim spine and unique vision. . . . Indiana’s is a singularly inventive new voice in Caribbean literature.”
— Diego Báez

“[One of] five Latino authors essential for your library. . . . Indiana is a spark that transforms what she touches. Almost a decade before she turned Dominican music upside down with the electro-merengue of Rita Indiana y los misterios, the talented Quisqueyanan writer had already published the novel La estrategia de Chochueca. Since then, after a break to pursue her musical career, she has published three other novels. . . . Papi, recently translated into English by Obejas, Nombres y animales, and La mucama de Omicunlé.”
— El Diario

“Masterfully translated by Obejas. . . . the lyricism and endless flow of scenery in Papi reminds me of Ginsberg’s ‘Howl.’ . . . This is a reading experience, like listening to a song or walking into an art installation that you can occupy and experience. Through repetition and swirling images, feelings articulated and rearticulated in later scenes in new locations, Papi is a nightmarish reading experience. It’s sexy, sad, and told to you in the voice of an eight year old. Read if you dare.”
— Emma Terhaar

“[Indiana is one of] 'Seven writers with un pie aquí y uno allá.' . . . These women are all in possession of unique individual voices that shed light on the complex psychological and economic condition of living with un pie aquí y uno allá: one foot here and one foot there. . . . Papi is a hallucinatory and stylistically innovative story about a child who is at once adoring and afraid of her outrageous drug lord father.”
— Emily Raboteau

“A tour of 1980s Santo Domingo, this novel dives into organized crime and the merengue dance craze—all told in a delirious, frantic way by a little girl. It is a unique recounting of how Santo Domingo grew into the metropolis it is today.”
— Frank Báez, author of "Last Night I Dreamt I Was a DJ"

“The narrator, Papi’s young daughter, repeats ‘Papi’ like a mantra, spell, or rosary. His name takes on a supernatural power; it represents his daughter’s immense belief in him no matter the length of his absences. Indiana artfully shows that invoking Papi on the page takes more than the usual level of craft, writing or otherwise. . . . The world has seen many narratives of absent fathers, but this narrator’s dedication to her father is as charming and lyrical as it is tragic and human. By blending persona and myth, this hyperreal work of fiction potently expresses the pain of an abandoned child. The narrator’s embellishments not only attempt to assuage her own feelings of rejection and loss but also give Papi a thousand chances to live up to her dreams of him. Though the incantation cannot change reality, it still provides a sense of comfort when the dream ends.”
— Marilyse V. Figueroa, Texas State University

One of 75 Notable Translations of 2016
— World Literature Today

“Indiana is truly a renaissance woman. Not only is she one of the most exciting Dominican authors in recent years, she is also a musical force to be reckoned with. Her songs are a unique blend of ridiculously fast paced electronic beats, urban and classic merengue, and fantastic story telling. She’s one of those rare artists whose music you can either dance to or sit down and listen to as if it were a great novel.”
— Alt.Latino, NPR.org

“Reads like an extended song. . . . So fast-paced that it must be swallowed whole, for setting it aside is as dangerous as jumping from a speeding motorcycle.”
— El País

“Papi is a tour de force. . . . A torrent here channeled by a girl who waits for the return of her father. . . . The imagination of this creature can be almost psychedelic.”
— El País