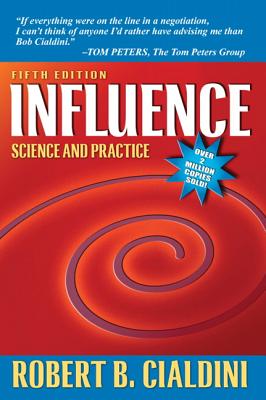 Influence: Science and Practice is an examination of the psychology of compliance (i.e. uncovering which factors cause a person to say "yes" to another's request). Written in a narrative style combined with scholarly research, Cialdini combines evidence from experimental work with the techniques and strategies he gathered while working as a salesperson, fundraiser, advertiser, and in other positions inside organizations that commonly use compliance tactics to get us to say "yes." Widely used in classes, as well as sold to people operating successfully in the business world, the eagerly awaited revision of Influence reminds the reader of the power of persuasion. Cialdini organizes compliance techniques into six categories based on psychological principles that direct human behavior: reciprocation, consistency, social proof, liking, authority, and scarcity.

Robert B. Cialdini is Regents' Professor of Psychology and Marketing at Arizona State University, where he has also been named W. P. Carey Distinguished Professor of Marketing. He has taught at Stanford University and Harvard's Kennedy School of Government. He has been elected president of the Society of Personality and Social Psychology. He is the recipient of the Distinguished Scientific Achievement Award of the Society for Consumer Psychology, the Donald T. Campbell Award for Distinguished Contributions to Social Psychology, and the (inaugural) Peitho Award for Distinguished Contributions to the Science of Social Influence. Dr. Cialdini attributes his interest in social influences to the fact that he was raised in an entirely Italian family, in a predominantly Polish neighborhood, in a historically German city (Milwaukee), in an otherwise rural state.