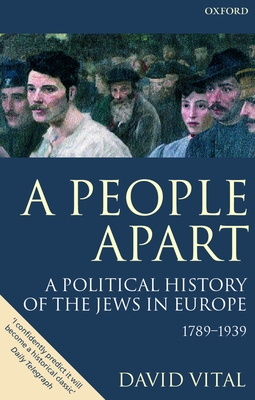 In the twentieth century, the world saw both the greatest triumph of Jewish history--the birth of the nation of Israel, and its greatest tragedy--the state-sponsored genocide of the Holocaust. A People Apart is the first study to examine the role played by the Jews themselves, across the whole of Europe, during the century and a half leading up to these momentous events. David Vital explores the Jews' troubled relationship with Europe, documenting the struggles of this 'nation without a territory' to establish a place for itself within an increasingly polarized and nationalist continent. This powerful new analysis represents a watershed in our understanding of the history of the Jews in Europe, and as a result, in the whole history of the continent.

David Vital is former Nahum Goldmann Professor of Diplomacy at Tel Aviv University. He served in the Israeli government for eleven years, holding posts in the Foreign Ministry and the Prime Minister's office. He has taught at UCLA, Dartmouth, and Northwestern. He lives in Israel.