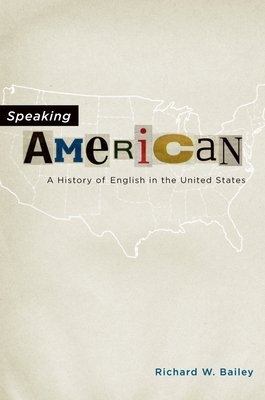 By Richard W. Bailey
Out of Print

When did English become American? What distinctive qualities made it American? What role have America's democratizing impulses, and its vibrantly heterogeneous speakers, played in shaping our language and separating it from the mother tongue? A wide-ranging account of American English, Richard Bailey's Speaking American investigates the history and continuing evolution of our language from the sixteenth century to the present. The book is organized in half-century segments around influential centers: Chesapeake Bay (1600-1650), Boston (1650-1700), Charleston (1700-1750), Philadelphia (1750-1800), New Orleans (1800-1850), New York (1850-1900), Chicago (1900-1950), Los Angeles (1950-2000), and Cyberspace (2000-present). Each of these places has added new words, new inflections, new ways of speaking to the elusive, boisterous, ever-changing linguistic experiment that is American English. Freed from British constraints of unity and propriety, swept up in rapid social change, restless movement, and a thirst for innovation, Americans have always been eager to invent new words, from earthy frontier expressions like catawampously (vigorously) and bung-nipper (pickpocket), to West African words introduced by slaves such as goober (peanut) and gumbo (okra), to urban slang such as tagging (spraying graffiti) and crew (gang). Throughout, Bailey focuses on how people speak and how speakers change the language. The book is filled with transcripts of arresting voices, precisely situated in time and space: two justices of the peace sitting in a pumpkin patch trying an Indian for theft; a crowd of Africans lounging on the waterfront in Philadelphia discussing the newly independent nation in their home languages; a Chicago gangster complaining that his pocket had been picked; Valley Girls chattering; Crips and Bloods negotiating their gang identities in LA; and more. Speaking American explores--and celebrates--the endless variety and remarkable inventiveness that have always been at the heart of American English.

Richard W. Bailey was the author of Images of English: A Cultural History of the Language, Nineteenth-Century English, and Rogue Scholar: The Sinister Life and Celebrated Death of Edward H. Rulloff. Bailey served in the course of his career as the President of the American Dialect Society and of the Dictionary Society of North America, and the associate editor for The Oxford Companion to the English Language. A long-time faculty member at the University of Michigan, he retired as Fred Newton Scott Collegiate Professor of English.