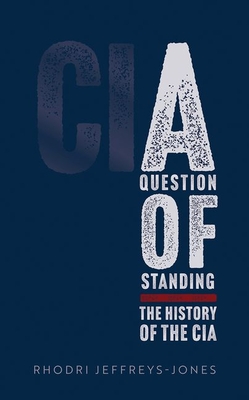 A Question of Standing deals with recognizable events that have shaped the history of the first 75 years of the CIA. Unsparing in its accounts of dirty tricks and their consequences, it values the agency's intelligence and analysis work to offer balanced judgements that avoid both celebration and condemnation of the CIA. The mission of the CIA, derived from U-1 in World War I more than from World War II's OSS, has always been intelligence. Seventy-five years ago, in the year of its creation, the National Security Act gave the agency, uniquely in world history up to that point, a democratic mandate to pursue that mission of intelligence. It gave the CIA a special standing in the conduct of US foreign relations. That standing diminished when successive American presidents ordered the CIA to exceed its original mission. When they tasked the agency secretly to overthrow democratic governments, the United States lost its international standing, and its command of a majority in the United Nations General Assembly. Such dubious operations, even the government's embrace of assassination and torture, did not diminish the standing of the CIA in US public opinion. However, domestic interventions did. CIA spying on domestic protesters led to tighter congressional oversight from the 1970s on. The chapters in A Question of Standing offer a balanced narrative and perspective on recognizable episodes in the CIA's history. They include the Bay of Pigs invasion, the War on Terror, 9/11, the weapons of mass destruction deception, the Iran estimate of 2007, the assassination of Osama bin Laden, and Fake News. The Intelligence Reform and Terrorism Prevention Act of 2004 diminished the CIA and is construed as having been the right solution undertaken for the wrong reasons, reasons that grew out of political opportunism. The book also defends the CIA's exposure of foreign meddling in US elections.

Rhodri Jeffreys-Jones, Professor Emeritus of American History and Honorary Fellow, University of Edinburgh Rhodri Jeffreys-Jones is an Emeritus Professor of American history at the University of Edinburgh. He studied at the Universities of Wales, Michigan, Harvard, and Cambridge, and is the honorary president of the Scottish Association for the Study of America. He has held visiting fellowships and professorships in Harvard, Berlin, and Toronto. He is the author of a prize-winning book on the American left, and of sixteen other books published in eleven languages, mainly on US intelligence history, including The CIA and American Democracy (1989), The FBI: A History (2007), In Spies We Trust: The Story of Western Intelligence (2012), and We Know All About You (2017).