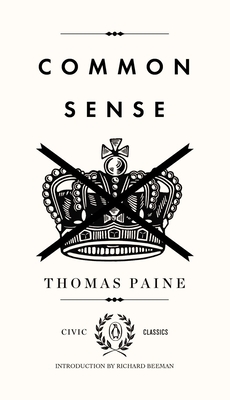 The radical pamphlet that helped incite the American Revolution

Penguin presents a series of six portable, accessible, and—above all—essential reads from American political history, selected by leading scholars. Series editor Richard Beeman, author of The Penguin Guide to the U.S. Constitution, draws together the great texts of American civic life to create a timely and informative mini-library of perennially vital issues. Whether readers are encountering these classic writings for the first time, or brushing up in anticipation of the 50th anniversary of the Civil Rights Act, these slim volumes will serve as a powerful and illuminating resource for scholars, students, and civic-minded citizens.

Common Sense is the book that created the modern United States, as Paine's incendiary call for Americans to revolt against British rule converted millions to the cause of independence and set out a vision of a just society. Published anonymously in 1776, six months before the Declaration of Independence, Common Sense was a radical and impassioned call for America to free itself and set up an independent republican government. Savagely attacking hereditary kingship and aristocratic institutions, Paine urged a new beginning for his adopted country in which personal freedom and social equality would be upheld and economic and cultural progress encouraged. His pamphlet was the first to speak directly to a mass audience—it went through fifty-six editions within a year of publication—and its assertive and often caustic style embodied the democratic spirit he advocated.

Thomas Paine was born Thomas Pain in Thetford, England, on January 29, 1737, the son of a poor corset-maker. At age sixteen, Paine ran away from home and became a sailor during the Seven Years War. After the war he held several odd jobs for the British government and worked hard to supplement the little education he received as a child. While living in England in 1772, Paine wrote his first political pamphlet, The Case of the Officers of Excise. Paine came to America in 1774, was appointed editor of Pennsylvania Magazine and became active in the call for American independence from England. His revolutionary pamphlet, Common Sense, was published in 1776, sparking some of the first public calls for America to rid itself of British rule. He spent the next fifteen years of his life in England and France and wrote several more political pamphlets, including Rights of Man (1790), The Age of Reason (1794), and Agrarian Justice (1796). In 1802 Paine returned to the United States, where he died in June of 1809 in the Greenwich Village neighborhood of New York City.

Richard Beeman, the John Welsh Centennial Professor of History Emeritus at the University of Pennsylvania, has previously served as the Chair of the Department of History, Associate Dean in Penn's School of Arts and Sciences, and Dean of the College of Arts of Sciences. He serves as a trustee of the National Constitution Center and on the center's executive committee. Author of seven previous books, among them The Penguin Guide to the United States Constitution and Plain Honest Men: The Making of the American Constitution, Professor Beeman has received numerous grants and awards including fellowships from the National Endowment for the Humanities, the Rockefeller Foundation, the Institute for Advanced Study at Princeton, and the Huntington Library. His biography of Patrick Henry was a finalist for the National Book Award.

“No writer has exceeded Paine in ease and familiarity of style; in perspicuity of expression, happiness of elucidation, and in simple unassuming language.” —Thomas Jefferson