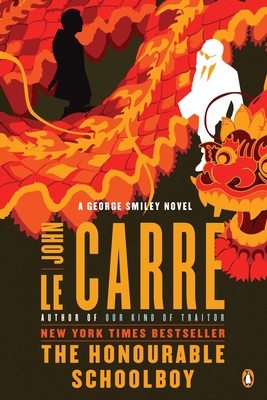 In the second part of John le Carré's Karla Trilogy, the battle of wits between spymaster George Smiley and his Russian adversary takes on an even more dangerous dimension.

As the fall of Saigon looms, master spy George Smiley must outmaneuver his Soviet counterpart on a battlefield that neither can afford to lose.

The mole has been eliminated, but the damage wrought has brought the British Secret Service to its knees. Given the charge of the gravely compromised Circus, George Smiley embarks on a campaign to uncover what Moscow Centre most wants to hide. When the trail goes cold at a Hong Kong gold seam, Smiley dispatches Gerald Westerby to shake the money tree. A part-time operative with cover as a philandering journalist, Westerby insinuates himself into a war-torn world where allegiances—and lives—are bought and sold.

Brilliantly plotted and morally complex, The Honourable Schoolboy is the second installment of John le Carré's renowned Karla triology and a riveting portrayal of postcolonial espionage.

With an introduction by the author.

“Not a page of this book is without intelligence and grace.”—The New York Times

“Energy, compassion, rich and overwhelming sweep of character and action…one of the finest English novels of the seventies.”—The Times (UK)

“All the good things are there: the Balkan complexities of plot; the Dickensian profusion of idiosyncratic characters; and above all, le Carré’s glistening social observation.”—Time

Praise for the Karla Trilogy: