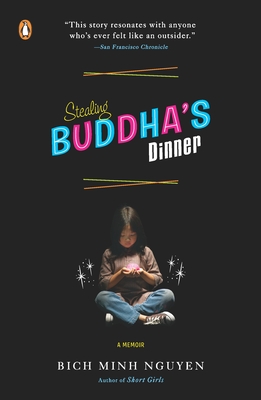 
As a Vietnamese girl coming of age in Grand Rapids, Michigan, Nguyen is filled with a rapacious hunger for American identity, and in the pre-PC-era Midwest (where the Jennifers and Tiffanys reign supreme), the desire to belong transmutes into a passion for American food. More exotic- seeming than her Buddhist grandmother's traditional specialties, the campy, preservative-filled "delicacies" of mainstream America capture her imagination.

In Stealing Buddha's Dinner, the glossy branded allure of Pringles, Kit Kats, and Toll House Cookies becomes an ingenious metaphor for Nguyen's struggle to become a "real" American, a distinction that brings with it the dream of the perfect school lunch, burgers and Jell- O for dinner, and a visit from the Kool-Aid man. Vivid and viscerally powerful, this remarkable memoir about growing up in the 1980s introduces an original new literary voice and an entirely new spin on the classic assimilation story.

Bich Minh Nguyen is the author of three books: the memoir Stealing Buddha's Dinner and the novels Short Girls and Pioneer Girl. Her awards and honors include an American Book Award, a PEN/Jerard Award from the PEN American Center, a Bread Loaf fellowship, and best book of the year honors from the Chicago Tribune and Library Journal. Nguyen's work has also appeared in numerous anthologies and publications including The New Yorker, The Paris Review, The New York Times, and Literary Hub.  Nguyen received an MFA in creative writing from the University of Michigan, where she won Hopwood Awards in fiction, nonfiction, and poetry. She has taught at Purdue University and the University of San Francisco and is currently a professor in the MFA program in creative writing at the University of Wisconsin, Madison.

"Her typical and not-so-typical childhood experiences give her story a universal flavor." -USA Today

"[D]eftly crafted . . . Far from being a memoir of what could be described as fitting into the kitschy ethnic-lit genre, her story is at once personal and broad, about one Vietnamese refugee navigating U.S. culture as well as an exploration of identity. . . . [S]he pays equal attention to the rhythm and poignancy of language to build her story as she does the circumstances into which she was born." -- Michael Standaert, Los Angeles Times

"The author's prose is lovely and her imagery fresh. And in her recreation of a world populated by Family Ties [and] Ritz crackers . . . she has captured the 1980s with perfection. . . . This debut suggests she's a writer to watch." -- Kirkus Reviews

"Nguyen brings back moments and sensations with such vivid clarity that readers will find themselves similarly jolted back in time. She's a sensuous writer--colors and textures weave together in her work to create a living fabric. This book should be bought and read anytime your soul hungers for bright language and close observation." - Emily Carter Roiphe, Minneapolis Star Tribune