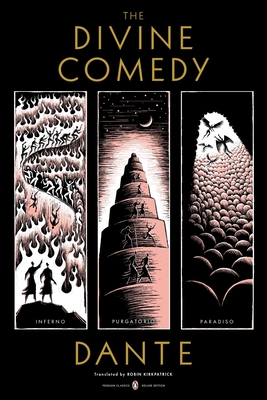 An epic masterpiece and a foundational work of the Western canon, The Divine Comedy describes Dante's descent into Hell with Virgil as his guide; his ascent of Mount Purgatory and reunion with his dead love, Beatrice; and, finally, his arrival in Heaven. Examining questions of faith, desire, and enlightenment and furnished with semiautobiographical details, Dante's poem is a brilliantly nuanced and moving allegory of human redemption. This acclaimed blank verse translation is published here for the first time in a one-volume edition.

Dante Alighieri (1265–1321) was born in Florence and is considered Italy's greatest poet. It is believed that The Divine Comedy was written between 1308 and 1320.

Robin Kirkpatrick is a professor of Italian and English literature at the University of Cambridge and has written a number of books on Dante and on the Renaissance.

Eric Drooker is an award-winning painter and graphic novelist who has illustrated dozens of covers for the New Yorker and designed the animation for the film Howl, based on the poem by Allen Ginsberg. He lives in Berkeley, California.

“Kirkpatrick brings a more nuanced sense of the Italian and a more mediated appreciation of the poem's construction than nearly all of his competitors.” —The Times (London)

“We gain much from Kirkpatrick’s fidelity to syntax and nuance. . . . His introduction . . . tells you, very readable indeed, pretty much all you need for a heightened appreciation of the work.”
—The Guardian

“Likely to be the best modern version of Dante . . . The perfect balance of tightness and colloquialism.” —Bernard O’Donoghue

“This version is the first to bring together poetry and scholarship in the very body of the translation—a deeply informed version of Dante that is also a pleasure to read.” —David Wallace, University of Pennsylvania