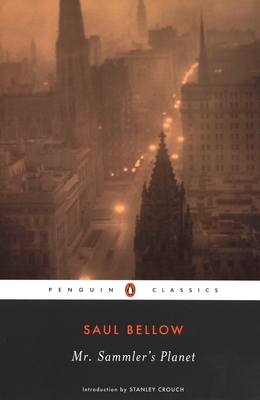 Mr. Artur Sammler, Holocaust survivor, intellectual, and occasional lecturer at Columbia University in 1960s New York City, is a “registrar of madness,” a refined and civilized being caught among people crazy with the promises of the future (moon landings, endless possibilities).  His Cyclopean gaze reflects on the degradations of city life while looking deep into the sufferings of the human soul.  “Sorry for all and sore at heart,” he observes how greater luxury and leisure have only led to more human suffering. To Mr. Sammler—who by the end of this ferociously unsentimental novel has found the compassionate consciousness necessary to bridge the gap between himself and his fellow beings—a good life is one in which a person does what is “required of him.” To know and to meet the “terms of the contract” was as true a life as one could live.  At its heart, this novel is quintessential Bellow: moral, urbane, sublimely humane.

This Penguin Classics edition features an introduction by Stanley Crouch.

Saul Bellow was praised for his vision, his ear for detail, his humor, and the masterful artistry of his prose. Born of Russian Jewish parents in Lachine, Quebec in 1915, he was raised in Chicago. He received his Bachelor's degree from Northwestern University in 1937, with honors in sociology and anthropology, and did graduate work at the University of Wisconsin. During the Second World War he served in the Merchant Marines.

His first two novels, Dangling Man (1944) and The Victim (1947) are penetrating, Kafka-like psychological studies. In 1948 he was awarded a Guggenheim Fellowship and spent two years in Paris and traveling in Europe, where he began his picaresque novel The Adventures of Augie March, which went on to win the National Book Award for fiction in 1954. His later books of fiction include Seize the Day (1956); Henderson the Rain King (1959); Mosby's Memoirs and Other Stories (1968); Mr. Sammler's Planet (1970); Humboldt's Gift (1975), which won the Pulitzer Prize; The Dean's December (1982); More Die of Heartbreak (1987); Theft (1988); The Bellarosa Connection (1989);The Actual (1996); Ravelstein (2000); and, most recently, Collected Stories(2001). Bellow has also produced a prolific amount of non-fiction, collected in To Jerusalem and Back, a personal and literary record of his sojourn in Israel during several months in 1975, and It All Adds Up, a collection of memoirs and essays.

Bellow's many awards include the International Literary Prize for Herzog, for which he became the first American to receive the prize; the Croix de Chevalier des Arts et Lettres, the highest literary distinction awarded by France to non-citizens; the B'nai B'rith Jewish Heritage Award for "excellence in Jewish Literature"; and America's Democratic Legacy Award of the Anti-Defamation League of B'nai B'rith, the first time this award has been made to a literary personage. In 1976 Bellow was awarded the Nobel Prize for Literature "for the human understanding and subtle analysis of contemporary culture that are combined in his work."

Stanley Crouch’s books include Notes of a Hanging Judge, The All-American Skin Game (Nominated for the National Book Award), and a novel, Don’t the Moon Look Lonesome. He has received the Whiting Writer’s Award and a MacArthur Foundation “genius” award.

“The most important writer in English in the second half of the twentieth century…Bellow’s oeuvre is both timeless and ruthlessly contemporary.” –Bryan Appleyard, Sunday Times (London)