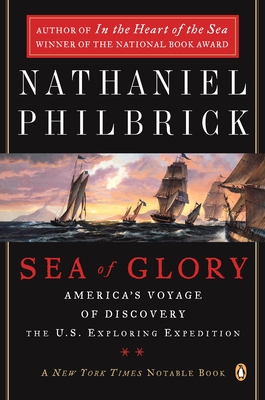 "A treasure of a book."—David McCullough

The harrowing story of a pathbreaking naval expedition that set out to map the entire Pacific Ocean, dwarfing Lewis and Clark with its discoveries, from the New York Times bestselling author of Valiant Ambition and In the Hurricane's Eye.

America's first frontier was not the West; it was the sea, and no one writes more eloquently about that watery wilderness than Nathaniel Philbrick. In his bestselling In the Heart of the Sea Philbrick probed the nightmarish dangers of the vast Pacific. Now, in an epic sea adventure, he writes about one of the most ambitious voyages of discovery the Western world has ever seen—the U.S. Exploring Expedition of 1838–1842. On a scale that dwarfed the journey of Lewis and Clark, six magnificent sailing vessels and a crew of hundreds set out to map the entire Pacific Ocean and ended up naming the newly discovered continent of Antarctica, collecting what would become the basis of the Smithsonian Institution. Combining spellbinding human drama and meticulous research, Philbrick reconstructs the dark saga of the voyage to show why, instead of being celebrated and revered as that of Lewis and Clark, it has—until now—been relegated to a footnote in the national memory.

Nathaniel Philbrick is the author of In the Heart of the Sea, winner of the National Book Award; Mayflower, finalist for the Pulitzer Prize; Bunker Hill, winner of the New England Book Award; Sea of Glory; The Last Stand; Why Read Moby Dick?; and Away Off Shore. He lives in Nantucket. His latest book is Valiant Ambition: George Washington, Benedict Arnold, and the Fate of the American Revolution.

"A breathtaking account of one of history's greatest adventures."
—Entertainment Weekly

"A worthy successor to In the Heart of the Sea."
—The Wall Street Journal

"Sea of Glory is a grand saga of scientific and nautical accomplishment."
—Newsweek