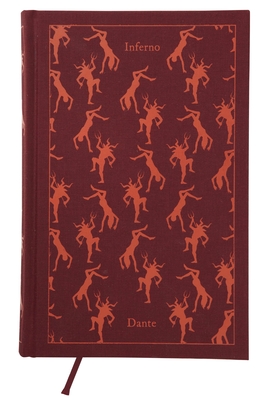 Part of Penguin's beautiful hardback Clothbound Classics series, designed by the award-winning Coralie Bickford-Smith, these delectable and collectible editions are bound in high-quality colourful, tactile cloth with foil stamped into the design. Describing Dante's descent into Hell midway through his life with Virgil as a guide, Inferno depicts a cruel underworld in which desperate figures are condemned to eternal damnation for committing one or more of seven deadly sins. As he descends through nine concentric circles of increasingly agonising torture, Dante encounters doomed souls including the pagan Aeneas, the liar Odysseus, the suicide Cleopatra, and his own political enemies, damned for their deceit. Led by leering demons, the poet must ultimately journey with Virgil to the deepest level of all. For it is only by encountering Satan, in the heart of Hell, that he can truly understand the tragedy of sin.

Dante Alighieri was born in 1265. Considered Italy's greatest poet, this scion of a Florentine family mastered in the art of lyric poetry at an early age. His first major work is La Vita Nuova (1292) which is a tribute to Beatrice Portinari, the great love of his life. Married to Gemma Donatic, Dante's political activism resulted in his being exiled from Florence to eventually settle in Ravenna. It is believed that The Divine Comedy-comprised of three canticles, The Inferno, The Purgatorio, and The Paradiso-was written between 1308 and 1320. Dante Alighieri died in 1321.

“Kirkpatrick brings a more nuanced sense of the Italian and a more mediated appreciation of the poem's construction than nearly all of his competitors.” —The Times (London)

“We gain much from Kirkpatrick’s fidelity to syntax and nuance. . . . His introduction . . . tells you, very readable indeed, pretty much all you need for a heightened appreciation of the work.”
—The Guardian

“Likely to be the best modern version of Dante . . . The perfect balance of tightness and colloquialism.” —Bernard O’Donoghue

“This version is the first to bring together poetry and scholarship in the very body of the translation—a deeply informed version of Dante that is also a pleasure to read.” —David Wallace, University of Pennsylvania