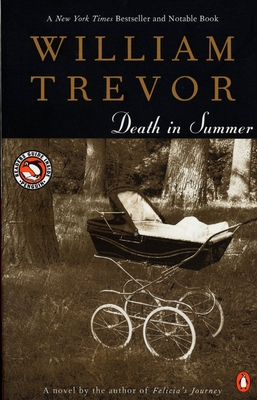 From the winner of the 1999 David Cohen British Literature Prize comes an unforgettably chilling novel, written with the compassion and artistry that define Trevor's fiction.

There were three deaths that summer. The first was Letitia’s, sudden and quite unexpected, leaving her husband, Thaddeus, haunted by the details of her last afternoon.

The next death came some weeks later, after Thaddeus’s mother-in-law helped him to interview for a nanny to bring up their baby. None of the applicants were suitable—least of all the last one, with her sharp features, her shabby clothes that reeked of cigarettes, her badly typed references—so Letitia’s mother moved herself in. But then, just as the household was beginning to settle down, the last of the nannies surprisingly returned, her unwelcome arrival heralding the third of the summer tragedies.

“William Trevor is an extraordinarily mellifluous writer, seemingly incapable of composing an ungraceful sentence. . . . His skill is very real, and equals his great compassion. With Death in Summer, these two qualities combine in a beautiful and resonant way.”—The New York Time Book Review

William Trevor was born in Mitchelstown, County Cork, and spent his childhood in provincial Ireland. He studied at Trinity College, Dublin. He is the author of twenty-nine books, including Felicia’s Journey, which won the Whitbread Book of the Year Award and was made into a motion picture, and The Story of Lucy Gault, which was shortlisted for both the Man Booker Prize and the Whitbread Fiction Prize. In 1996 he was the recipient of the Lannan Award for Fiction. In 2001, he won the Irish Times Literature Prize for fiction. Two of his books were chosen by The New York Times as best books of the year, and his short stories appeared regularly in The New Yorker. In 1997, he was named Honorary Commander of the British Empire.