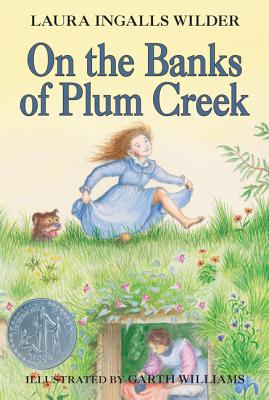 This is book number 4 in the Little House series.

Based on the real-life adventures of Laura Ingalls Wilder, On the Banks of Plum Creek is the Newbery Honor-winning fourth book in the Little House series, which has captivated generations of readers. This edition features the classic black-and-white artwork from Garth Williams.

The adventures of Laura Ingalls and her family continue as they leave their little house on the prairie and travel in their covered wagon to Minnesota. They settle into a house made of sod on the banks of beautiful Plum Creek. Soon Pa builds them a sturdier house, with real glass windows and a hinged door. Laura and Mary go to school, help with the chores around the house, and fish in the creek. Pa’s fiddle lulls them all to sleep at the end of the day. But then disaster strikes—on top of a terrible blizzard, a grasshopper infestation devours their wheat crop. Now the family must work harder than ever to overcome these challenges.

The nine books in the timeless Little House series tell the story of Laura’s real childhood as an American pioneer, and are cherished by readers of all generations. They offer a unique glimpse into life on the American frontier, and tell the heartwarming, unforgettable story of a loving family sticking together through thick and thin.